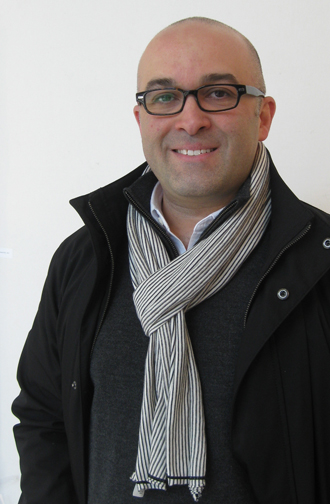 Antonio Viva, head of the Walnut Hill School for the Arts in Worcester, Massachusetts, one of three renowned arts schools in the United States, often tells his students that if they want to do well, they must be accustomed to “questions.”

Having high scores on paper only means that they know the answers, he said in an interview last month with the JoongAng Ilbo.

“Often times, a grade is the result of a student’s relationship to the answer. I think that a really good artist learns about the process and is comfortable with forming a relationship with the questions, not just the answer,” he said. “Grades are not an indicator of success.”

Students’ talent cannot be evaluated with scores only, he added.

Viva attended an art exhibition put on by Korean students going to the Walnut School, which was held in early March at Yongsan Art Center in Itaewon-dong, central Seoul.

His comments were meant as feedback for Korean students struggling to obtain high scores on the College Scholastic Ability Test, or CSAT, in order to gain acceptance into arts colleges.

The Walnut School is renowned here, with Koreans accounting for about a third of its total student body. Currently, 26 Koreans study there. Pianist Paik Hae-sun is also a graduate of the institution.

Viva also emphasized the importance of the role teachers play in making students comfortable with questions.

It’s imperative to help students find their voice, he added.

Walnut School requires students to focus on practicing for more than four hours a day.

Helping them put together high-quality portfolios is also built into the curriculum, unlike here, where most students attend expensive private institutions in their spare time to supplement their standard education.

Viva said he firmly believes that students should study hard in subjects all across the board, not just those they need to enter university.

Even if students have perfect skills, those skills are worth nothing if they don’t know how to think, he said.

Viva came to Walnut to head the school when he was 37. He previously taught English at various public and private school for nearly 20 years, though his philosophy on education is consistent no matter where he’s teaching.

Children should be observed by their parents while they’re young, he said, so they can get an idea of what they are initially attracted to.

“It’s becoming clearer that a young person’s talent cannot always be measured in one way,” Viva said. “It can be measured just by one test or one grade in a class, or from a piece of artwork, even.”