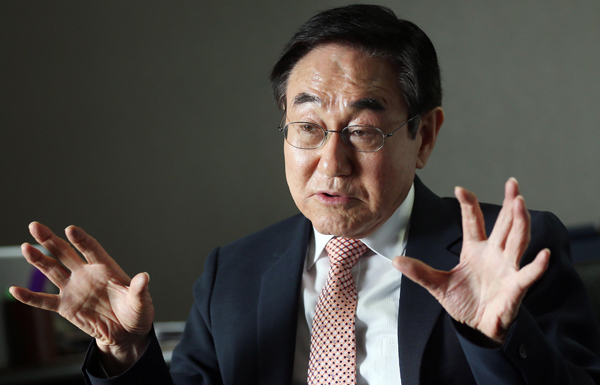 Hyun Myung-kwan, the chairman and CEO of the Korea Racing Authority, said the state-run company should be proactive in changing its corporate culture in a bid to stay competitive in an interview with the JoongAng Ilbo. By Byun Sun-goo

Labor union members and management officials from the Korea Racing Authority signed an agreement March 30 to outline measures that would normalize lax management practices, the first of its kind at such a large public corporation with more than 500 employees.

The agreement included a significant number of clauses that would see employee benefits reduced by 47 percent to 5.5 million won ($5,314) per person per year, down from the current 9.2 million won.

The deal prohibits union members from stepping onto the company’s premises during strikes. It also specifically bans employees in charge of budgeting, as well as those in the human resources, employee benefits and auditing departments, from joining the union.

Perhaps the most striking aspect of the agreement is that it was made at a company that has three labor unions, all of which are part of the Federation of Korean Trade Unions, a group that has traditionally been opposed to any moves to reform state-run businesses. The Korea Racing Authority has three separate unions for each group of employees: full-time, part-time and workers on the help desk.

So how was the deal struck?

Surprisingly, the answer from Hyun Myung-kwan, the chairman and CEO of the Korea Racing Authority (KRA), was simple.

“It was possible because both the management and regular employees believe the horseracing industry is in a state of crisis these days,” Hyun said. “We tried to revive an organization well loved by the public by taking proactive reform initiatives. That was the driving force that helped us arrive at such a quick management-labor agreement.”

“It was just a beginning step for reforming the KRA, as if we were reestablishing the company,” he added. “I hope to change the corporate structure with even more drastic reform measures.”

Q. Your reform plans must have been met with a backlash from the unions.

A. I had numerous meetings with the union to keep trying to convince them. The horseracing industry entered a crisis so serious that our annual sales have been stagnant for the past three years. Also, it has been stigmatized as a gambling industry, which has given it a negative corporate image. The public’s perception is more important than any immediate issues, like the reduction of employee benefits, including children’s schooling expenses. If people turn away from us, the KRA may lose its ground in the market, which may eventually threaten our employees’ utmost benefit: job stability.

The union used to hesitate in the face of reforms because of strike guidelines, which its umbrella group, the Federation of Korean Trade Unions, commanded. However, thankfully, union executives agreed with the management’s request to give the KRA a fresh start. Management appreciates this decision.

Unlike other debt-ridden public companies, the KRA has left surplus and made large donations. Don’t KRA workers feel somewhat upset?

When it comes to corporate reform, it is problematic to take a one-size-fits-all approach for all companies. But it is true that the KRA has been less competitive in the market, and any preemptive measures should be taken to boost its competitiveness. Instead of trimming benefits, the company will give back to its staff by strengthening training programs that will help them become competent in the global market.

Are there going to be additional reform measures?

Yes. During the last hiring season, the KRA saw the number of applicants as high as 521 to one for entry-level positions. Those top-tier talents become less competent after succeeding in taking a spot at public companies because they feel they’ve settled for the status quo rather than having taken a challenge.

That’s why state-run companies are destined to lag behind when competing with private companies.

That kind of corporate culture has to change through reforming the personnel management system - including salary and promotional regulations - in a bid to encourage employees to foster their own competitiveness. The salary structure will change to determine wage levels depending on responsibilities and performance, away from the current system that focuses on years of experience.

In the new system, one employee may receive a larger salary, up to three times higher than another person, even if they are the same rank. ... We will finish reforming these systems by the end of the year.