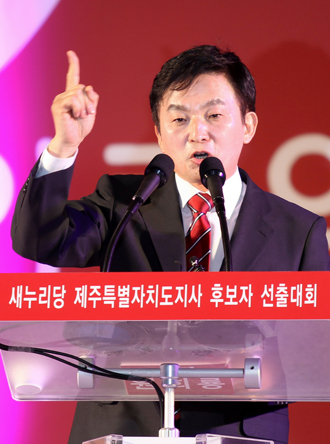 Won Hee-ryong delivers a speech yesterday after the Saenuri Party nominated him as a candidate for the Jeju Island gubernatorial race. [NEWS1]

The main opposition New Politics Alliance for Democracy (NPAD) yesterday launched an election commission to field the party’s candidates for the June local elections, a day after the party walked away from its earlier pledge to abolish party nominations.

While the opposition party grappled with the aftermath of its decision to reverse the pledge, the ruling Saenuri Party went ahead with its nomination schedule by announcing its nominee for the Jeju gubernatorial race.

NPAD co-Chairman Ahn Cheol-soo called for stronger unity, calling the party’s decision to renege on the pledge “the past.”

“Now, our first and foremost goal is to win the June 4 election,” he said, “so we should make a concerted effort to achieve that goal, and members should not divide the party because of vested interests or because they hold different views.”

However, many observers believe the party’s retreat will hurt its chances of victory in the election as well as Ahn’s image. Others have also speculated that the main opposition party could face an uphill battle in choosing its candidates because of its merger between two factions - Ahn’s supporters and members of the former Democratic Party.

Co-chairmen Ahn and Kim Han-gill will head the new screening committee. Other key members of the group include Chung Dong-young, Chung Se-kyun, Kim Doo-kwan and Sohn Hak-kyu, leading lawmakers from the former DP.

Serving as a standing adviser is Representative Moon Jae-in, who has largely been restrained from coming to the forefront after losing the 2012 presidential race.

“What we want to achieve through this election is to correct President Park Geun-hye’s tendency to ignore people and push ahead with what she believes is right,” Moon said yesterday. “We will also hold President Park accountable for retreating from her presidential pledges.”

Ahn stressed that the party should select candidates in line with the public’s view.

“No matter how many terms one serves, we should focus on choosing people who can earn the public’s endorsement,” Ahn said.

Meanwhile, the Saenuri Party pushed ahead with its schedule. The party yesterday nominated three-term politician Won Hee-ryong as its contender for Jeju Island governor. The selection reflects the result of a public opinion poll that pitted Won against Kim Kyung-taek and former Jeju Governor Kim Bang-hoon.

With the starting point on the Jeju Island, the Saenuri is scheduled to determine a number of its candidates going forward. The nominee for Ulsan mayor will be decided today, while the final candidate for Daegu mayor is scheduled to be selected on April 20.

The nomination for the party’s Seoul mayoral candidate, the most closely watched race in the polls, will be held on April 30.

The NPAD has only just started discussing the details over how to field candidates. The election commission of the NPAD said that a nominee for Jeju governor will be selected based on the results of a public opinion poll.

Discarding party nominations was one of Ahn’s long-touted promises and a key factor in the merger between Ahn’s supporters and the Democrats.

Aware of public criticism, Ahn tendered an apology on Thursday.

The reversal came a day after it conducted a poll of its members and the public asking whether the party should break its promise to better its chances in the local elections.

In the survey conducted Wednesday of 89,826 party members and 2,000 members of the general public, 53.44 percent of those polled were in favor of the party breaking its pledge and nominating its own candidates for city, district and county councils, the lowest elected offices.

Of the 89,826 party members polled, 57.1 percent, or 51,323, said the party should break its promise for the sake of winning in the elections, while 49.7 percent of the public chose that response.