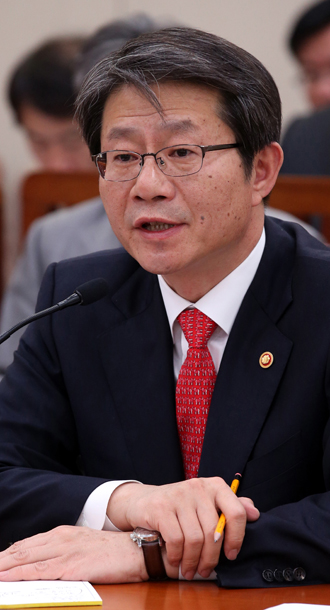 Unification Minister Ryoo Kihl-jae tells lawmakers at the National Assembly yesterday that the 2010 sanctions against Pyongyang will be lifted. [NEWS1]

“We have an intention to lift the sanctions,” Ryoo said at a National Assembly hearing when asked by an opposition party lawmaker yesterday whether it would be possible for the government to pursue the president’s goal of South-North cooperation with the sanctions in place.

“There are a lot of business projects in the idea proposed by the president,” Ryoo said, “and among the projects, we can carry out some of them even right now.”

The minister added, however, that some of the goals will require progress in North Korea’s denuclearization.

“In terms of the large-scale infrastructure projects, as the president also said, we need North Korea to take steps toward denuclearization,” the minister said. “In order to lift the May 24 measures, there are some steps that North Korea should take.”

The May 24 measures, imposed by the Lee Myung-bak administration in the aftermath of the sinking of South Korea’s Cheonan warship in March 2010, freezes most government-level interactions and aid for North Korea. Visiting North Korea has been strictly forbidden and only a few civic groups were allowed to visit with humanitarian aid.

As a condition of the lifting, the government had insisted that Pyongyang “apologize for the sinking of the Cheonan,” which Seoul says was torpedoed by the North, and “take responsible measures” for the prevention of future provocations. North Korea denies sinking the Cheonan.

Both ruling and opposition lawmakers at the hearing yesterday urged the government to lift or ease the sanctions to restart inter-Korean business projects.

“As a key to implementing the trust-building process on the Korean Peninsula, I think our side should make a bold decision,” Moon Dae-sung, a Saenuri Party lawmaker, said at the hearing.

“The biggest trend recently is the calls for lowering the threshold to restart the six-party talks,” Park Byeong-seug of the opposition New Politics Alliance for Democracy said. “We should offer a carrot to North Korea by lowering the threshold. They want the May 24 sanctions to be lifted.”

The chief representatives from Seoul and Beijing at the six-party talks met in Beijing yesterday for two-day negotiations regarding the talks, which have been suspended since 2008.

A high-ranking South Korean diplomat told reporters on Thursday that the negotiators of the six-party talks will soon decide whether to restart the dialogue, which is technically aimed at the denuclearization of North Korea but also deals with other issues.

“After the chief representatives of the six-party talks from Seoul and Beijing meet [this week], Beijing would take steps to discuss with North Korea [the resumption of the talks],” the South Korean Foreign Ministry official said. “Less than a month, or maybe within two weeks, there will be some consensus [among the representatives of six-party talks] over the conditions to restart the talks.”

However, the official added that if North Korea carries out a nuclear weapons test, a resumption of the talks will be difficult.

The Chinese ambassador to the United States said Washington is giving Beijing “a mission impossible” to exert pressure on North Korea to rein in its nuclear ambitions.

“There is one thing that worries me a little bit, and even more than a little bit, is that we’re very often told that China has such an influence over DPRK [North Korea] and we should force the DPRK to do this or that,” Ambassador Cui Tiankai said at a seminar held by the United States Institute of Peace in Washington on Thursday.

“Otherwise the United States would have to do something that would hurt China’s security interests. You see you are giving us a mission impossible.”

Beijing’s top envoy said those demands from Washington were not “fair” nor “constructive.”

“The peninsula is just at our doorstep, any chaos, any armed conflict there will certainly have cross-border effects on China,” Cui said. “But this problem cannot be solved by China alone. We need cooperation among the relevant parties.”