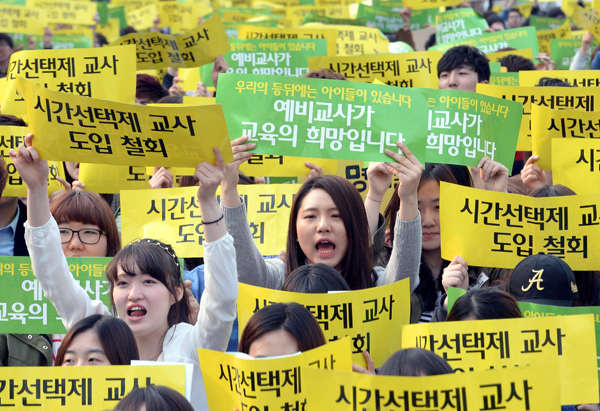 University students stage a rally at Independence Park in Seodaemun District yesterday in protest of the government’s move to allow regular teachers to work part-time. [NEWSIS]

Students at educational colleges nationwide boycotted classes yesterday and staged a rally in protest of the government’s move to expand the number of part-time teachers.

A total of 5,900 university students participated in the demonstration, which took place across Seoul, Busan, Jeju, Gwangju and Sejong.

The protest was spurred by the government’s decision to allow regular teachers, especially female educators, to work part-time starting in September if they want to spend more time raising their children.

The Ministry of Education said last month that the measure is intended to reduce the burden on workers and enhance welfare for female teachers, many of whom juggle child rearing and school work.

The National Union of Education University (NUEU), the association that represents universities, said that the system would increase the number of temporary part-time teachers.

“If the government tries to hire new part-time teachers to fill vacant hours left by regular teachers, it will only result in more nonregular workers,” the association said in a statement, calling the system a sneaky way to inflate the employment rate.

It went on to argue that the system would consequently reduce the recruitment of new teachers. Other educators noted that the government was seeking to create a “job sharing” effect through the new policy.

“If they introduce the flexible working-hour system, they will see one job split into two positions for two people,” said Kim Jin-cheol, the director of policy division at the Korean Teachers and Education Workers Association.

Protesters also pointed out that students will be negatively affected if some of teachers come just twice or three days a week. “The burden will be passed on to the students if some teachers only appear at work sporadically,” the association said.

In response to the protest, the Ministry of Education said that it will test-operate the flexible working-hour system for one year, after which it will decide whether to formally adopt it. “We will discuss the issue one year after the test operation. So we will examine the results of the trial and discuss it again from the beginning,” it said in a statement.

“We were only on the way to introducing the new system and hadn’t decided on specific details yet,” said an Education Ministry representative who wished to remain anonymous. “More importantly, the flexible-hour system has nothing to do with the policy on new recruits.”

The education authority stated that it will crack down on university students involved in the illegal protest or those who incite their peers to attend.

Although the ministry stressed that part-time teachers will be treated the same as regular teachers, educators who convert their full-time working hours into part-time will actually see their salary cut, the association claimed.

“The system will breed a new class of teachers who are regular teachers on the surface but aren’t treated accordingly,” it added.