Wicked stepmothers jailed, but not for very long

Wicked stepmothers jailed, but not for very long 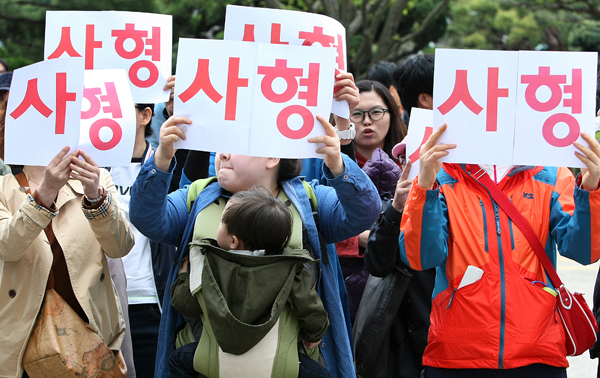 Civic groups for the defense of children’s rights protest yesterday outside the Daegu District Court, demanding a death sentence for a stepmother from Chilgok County, North Gyeongsang who beat her stepdaughter to death. The court sentenced her to 10 years in prison. By Gong Jung-sik

Two stepmothers who beat their stepdaughters to death were convicted yesterday in Daegu and Ulsan and sentenced to jail time.

But critics say their sentences were too lenient and won’t do enough to crack down on child abuse in Korea.

In Daegu District Court yesterday morning, the trial of a 36-year-old stepmother, surnamed Lim, and her husband, surnamed Kim, concluded. Lim was charged with beating her 8-year old stepdaughter so hard last August at their home in Chilgok County, North Gyeongsang, that her intestine ruptured and she died.

Lim also was charged with forcing the girl’s 12-year old sister to say she was responsible for her sister’s injuries.

But the sentences were much lighter than those requested by the prosecution: 20 years for Lim and seven years for Kim.

The guideline by the Supreme Court’s Sentencing Commission for someone convicted of inflicting a fatal injury is a jail sentence of three to five years. If there are mitigating circumstances, the guideline is two to four years. If there is an aggravating factor, the prison term may increase up to seven years, and if there are more than one aggravating factors, the term can go up to 10 and a half years.

In Lim’s case, her sentence was increased to 10 years, the court said, because the victim was her own stepdaughter and she tried to conceal her crime by forcing her other stepdaughter to take the blame.

When the judge read out the sentence, the sisters’ aunt, who raised them before they moved in with their father and stepmother in September 2012, cried, screamed and eventually fainted. She had to be carried out of the courtroom.

“We expected the penalties would be heavier than the prosecutors’ demand, but the panel of judges seems to have followed the guideline of the Supreme Court,” Lee Myung-suk, president of the Korean Women Lawyers Association, said after the ruling. “The charge of subordination of perjury must be added in the appellate trial because the stepmother tried to conceal her wrongdoings by making the victim’s sister perjure herself.”

In Ulsan District Court yesterday afternoon, the trial of another cruel stepmother, surnamed Park, concluded. The court sentenced her to 15 years in prison for beating her 8-year-old stepdaughter so hard last October that 16 of her 24 ribs were broken. Some of them pierced her lungs and she died.

A 15-year sentence is longer than the Supreme Court guideline, but the court credited the extreme cruelty of the crime.

But prosecutors had demanded a death sentence on a charge of murder, but the court convicted her of causing bodily injury resulting in death. In legal terms, the panel of judges did not admit dolus eventualis, which means the defendant was aware of the consequences of his or her actions.

According to a report by the National Child Protection Agency (NCPA), 97 children died from abuse between 2001 and 2012, but experts say that number is an understatement. Medical institutions are not required to report all cases of children dying from physical abuse to the NCPA.

At the end of last year, a special law on child abuse was passed by the National Assembly that should help authorities take child abuse more seriously. When the law is enforced on Sept. 29, the police may take away children who are believed to have been abused from their parents. Moreover, if a child is being exposed to serious or repeated abuse, prosecutors must file a claim to strip the parents of their parental rights.

Meanwhile, the prosecutors of the cases in Daegu and Ulsan said they were not satisfied with the sentences, and will appeal them.

“We accused [the suspect] of murder and don’t accept the judges’ verdict of bodily injury resulting in death,” said Lee Gi-seok, a prosecutor in the Ulsan District Prosecutors’ Office.

“We will try to prove it as a murder case,” he said.