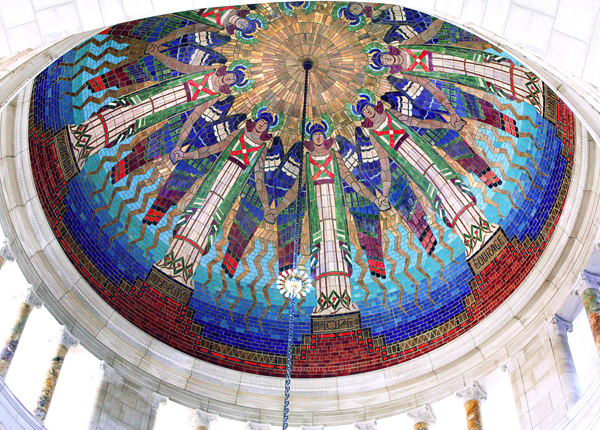 The Nebraska State Capitol Rotunda Dome in Lincoln, far left, the Dome of the twelve apostles in the Cathedral Basilica of St. Louis, middle, and metal-and-enamel roundels on the facade of Radio City Music Hall in New York were created by art deco muralist Hildreth Meiere. [AP/NEWSIS]

Yet the artist remains relatively unknown.

A new book is seeking to give Meiere her due, chronicling a career that broke barriers at a time in the first half of the 20th century when few female artists were working on such a grand scale.

“Her work has been enjoyed by millions of people over the last 90 years without knowing her name. That’s why we have written this book.’’

Meiere, who would go on to work on about 100 projects in 15 states, came of age as an artist at a time when many leading architects turned to the muralist to embellish their buildings.

She landed her first major commission in 1922 to decorate the Great Hall of the National Academy of Sciences in Washington, D.C., where she created medallions of Art Deco figures depicting earth, fire, water and air, among other imagery.

Among her many captivating narrative designs are the shimmering glass mosaics she created for the eight-story-high arch in the main sanctuary of Temple Emanu-El and the narthex of St. Bartholomew’s Church in New York. 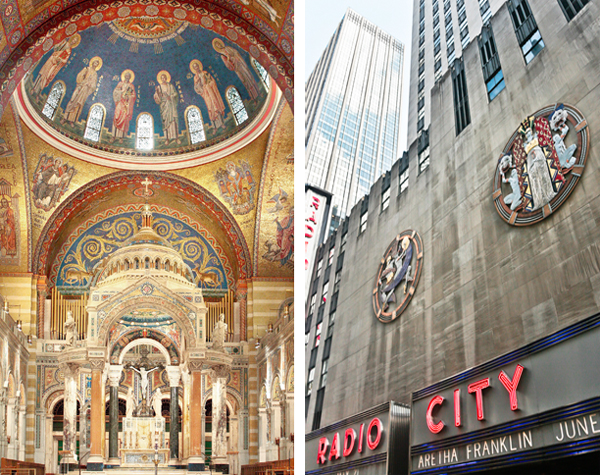 Perhaps her most recognizable designs are on the facade of Radio City Music Hall, where colossal metal-and-enamel roundels depict dance, drama and song.

Meiere once said that a beautiful mural is “something that cannot be taken away without hurting the design of the building. If the building can look as well without it, it shouldn’t be there in the first place.’’

In 1946, Meiere was the first woman appointed to the New York City Art Commission and later became the first woman to receive the Fine Arts Medal of the American Institute of Architects. Yet after her death in 1961, as architectural tastes changed, she became largely forgotten.

When she designed the roundels for Radio City Music Hall, “nobody had worked in mixed metal on a scale like that before,’’ said Brawer, who curated an exhibition of her ecclesiastical work at New York’s Museum of Biblical Art in 2012.

Adrianne Rubin, the museum’s director of exhibitions, said Meiere’s “ecclesiastical and secular work continue to impact viewers profoundly, so it is only fitting that her name be associated with her beautiful and innovative work.’’

To help reintroduce her to the public, a Meiere Crawl exploring her sites in New York City is planned for May 18. The book is scheduled for release on May 1.