How World War II ended and our modern world began

How World War II ended and our modern world began 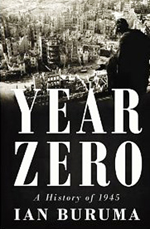 THE HAGUE - Born to a Dutch father and a British mother, Ian Buruma was first known as a specialist in Japan and Asia more broadly, pursuing an eclectic career that included acting and dancing in 1970s Tokyo.

He spoke to Reuters at the Writers Festival in The Hague, where he grew up, about his latest book, “Year Zero: A History of 1945,” a study of the days and months that followed the end of World War Two around the world.

It was also the year in which the foundations for the modern world were laid, with the establishment of the welfare state in Britain and former belligerents in Europe making the first moves towards establishing what became the European Union. Further afield, the United Nations took its first faltering steps.

Buruma, a Dutch citizen who now lives in New York, has written books on Japan and Europe, as well as “Murder in Amsterdam,” about the murder in the Netherlands by a Muslim militant of film director Theo van Gogh.

He has twice been voted one of the world’s Top 100 public intellectuals by “Foreign Policy” and “Prospect” magazines.

A. One reason was that we’ve seen several wars of choice unleashed by the United States and assisted by Britain in the Middle East, and all the people who were in charge of these wars were of a generation that hadn’t had any personal memories of World War II.

The leaders themselves, but also their intellectual boosters, the neocons, talked about war and the use of military force in a rather lazy manner, as if you could get rid of a dictator and then things sort themselves out. There was an idealism about building a better world in 1945, a more equal one. Winston Churchill was voted out and the Labour Prime Minister Clement Attlee came in. That year gave a boost to social democracy and the welfare state? With the idea of European unity and the United Nations there was a strong and idealistic sense of building a better world. That idealism is certainly gone, which is another reason I thought it would be good to pay attention to that year.

Why does the book have such a melancholic mood?

It doesn’t make you feel very cheerful about human nature and human behavior. The aftermath of the war shows that people who had been victimized themselves can very quickly become aggressors and that the capacity for violence and malice is constantly there.

The stories of postwar violence are an antidote to the way most of us in Western Europe grew up, those of us in the postwar generation, who believed the end of the war was all sweetness and light, dancing in the streets.

And do you see any lessons from your book?

I’m sceptical about learning lessons from history. But one is perhaps that any violent intervention is going to have unintended consequences that are difficult to deal with. I have no doubt about the justice of fighting a war of self defence, but I am increasingly sceptical about using military force even in the name of humanitarianism. In the early 2000s, people were too careless about it.

Do you see any reasons to be optimistic about the world we live in?

No, not really. You could say it’s become unthinkable that Germany and France will go to war again in any foreseeable future, so the source of serious conflict in Europe has probably been pacified and that’s a great thing. But I think we’re in a very difficult period with the Middle East, tensions in East Asia, the fact that the United States’ role as world policeman is coming to an end and probably should come to an end, the fact that Russia is becoming more authoritarian. Capitalist economies are creating more and more inequalities, while European politics is being poisoned by a populism to which the mainstream parties don’t really have an answer. I’m not saying it’s all going to end in Armageddon, but I think we’re in a very difficult place.

In the past you were known primarily as an Asia expert. Does China’s rise not give you grounds for optimism?

It would if it were a better form of government. But it’s a very authoritarian government, driven by a form of belligerent nationalism. If it were a more open and more liberal country then yeah, it would be a great thing. I don’t see anything wrong with China’s rise per se. Nor do I believe as some people argue that China is somehow culturally disposed to be closed and authoritarian.

Much of the Chinese world, Taiwan in particular, is more open and liberal.

What comes next for you? Do you have more cheerful topics up your sleeve?

Cheerful topics are rarely the most interesting.