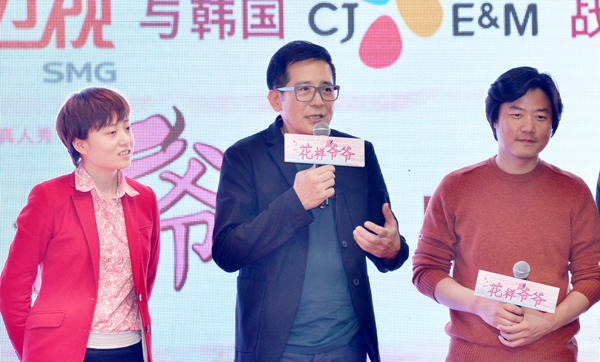 The Chinese version of “Grandpas over Flowers” will be filmed by Dragon Television, a cable network of the Shanghai Media Group, the tvN production team for the Korean show announced Wednesday at a press conference in Shanghai.

Media reports last month said that CJ E&M, which operates a multiple-cable network including tvN, had signed a contract with Shanghai

Media Group to offer production consulting on a Chinese version of “Grandpas.”

“I am deeply honored that our show can be remade in China. To make the series successful, I’m sharing insights with the Chinese producer Li Wen Yu,” said producer Na Young-seok, who created the “Grandpas” series.

“The Chinese version will be based on the original show from tvN, since China and Korea share many common values,” the Chinese producer added. “At the same time, we will also respect Chinese viewers’ preferences by putting in local aspects to the show.”

Chinese “Grandpas” will follow a similar narrative to the original, featuring four celebrity grandfathers and a young male character who will assist the seniors on their travels.

The first season, to be filmed in Switzerland and France, will air in June.