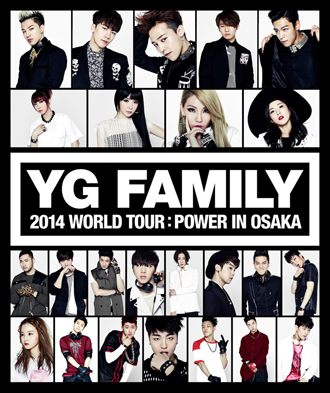 The YG Family spent the weekend with about 50,000 of their Japanese fans at their concert in Kyocera Dome Osaka.

Psy and Akdong Musician did not attend the show.

2NE1 opened the show, performing their new track “Crush.” The foursome also sent fans into hysterics with their debut song “Fire” and some of their latest tracks, including “Come Back Home.”

The boy band Winner, who are new on the scene, took the stage next. The five-man group sang “Go Up” and covered 2NE1’s ballad track “Missing You” in their own unique style.

Hip-hop trio Epik High, on the other hand, took the concert in a different direction, singing upbeat songs, including “Fly” and “Love, Love, Love.” The group also performed “Don’t Hate Me,” the lead track of their first album since joining YG in 2012.

Last but not least, as Big Bang appeared on stage. The five members greeted the fans in fluent Japanese and performed “Haru Haru,” “Blue” and “Fantstic Baby,” among others.

Concert-goers’ attention was most focused on the unexpected collaborations among YG artists; Sandara Park (2NE1) covered T.O.P.’s hip-hop solo track “Doom Dada,” while G-Dragon and CL performed a duet of “The Baddest Female.”

After Osaka, the YG artists will perform at the Tokyo Dome on May 3 and then tour other cities in the region.