Literary love on display in London

Literary love on display in London 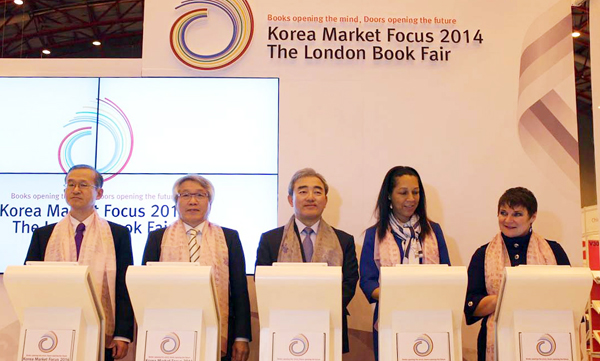 The Korean-style protocol was contagious. Korean and British staff members promptly formed a line when Camilla, the second wife of Britain’s Prince Charles, visited the Korean exhibition at the London Book Fair. A British staff member said it wasn’t necessary, but he, too, was overwhelmed by the formal atmosphere.

Camilla stayed for about five minutes and spoke with Hwang Sun-mi, the author of “Leafie, a Hen Into the Wild.” All she knew about Hwang was that she was a writer. Camilla asked what books she had written, and upon learning that Hwang was a children’s book writer, Camilla said that it was important to have children read. When Hwang said that her book has been published in multiple languages, Camilla complemented her success and said she would read it to her grandchildren.

Hwang is the only author that Camilla met at the book fair. Hwang was one of three authors featured as the Author of the Day, with their photos displayed at the entrance.

Camilla’s visit brought relief to the Korean organizers. Many of them were faced with an emotional struggle after seeing reports in Korea that Korean books were sensationally popular in Britain, thanks to the book fair.

“Korean children’s books topping British best-seller chart,” was the title of one article, and a crime novel by another author was also reported to be a best-seller.

It is true that “Leafie, a Hen Into the Wild” has become popular. However, it is certainly not topping the chart. It was the top seller in some bookstores, but they were just local ones. In fact, the children’s book is ranked 90th in overall sales. It is also quite a stretch to say that the Korean crime novel is selling very well.

Though organizers may have felt awkward, they couldn’t openly say that the reports were exaggerated. But the appearance of Camilla brought a new significance. They can now say that Korean books are selling well enough to warrant a visit by a British royal.

There were many moving moments during the London Book Fair, but it was not because of praise from Camilla or British visitors. The most impressive moments came when Korean authors discussed their love of literature. When Lee Seung-wu was asked what he would do if he couldn’t write, he seemed shocked and was speechless for a while. Then he responded: “I’ve never imagined not being able to write. But I can read, right?”


*The author is a London correspondent of the JoongAng Ilbo.