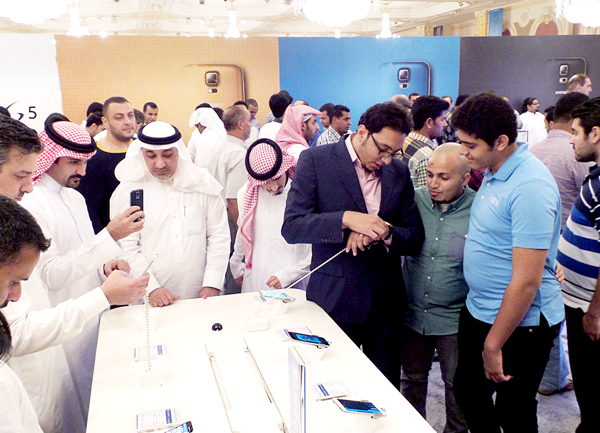 Customers browse the Galaxy S5 in Jeddah, Saudi Arabia, on Friday, the first day of the phone’s global launch in 125 countries. Samsung Electronics said the 5.1-inch smartphone is showing strong early sales around the world.[NEWSIS]

The Galaxy S5 is showing strong early sales across the globe, according to Samsung Electronics yesterday, endorsing what appears to be its shift in focus toward price competitiveness.

The company said the Galaxy S5’s 16 megapixel camera, water- and dust-resistant exterior and HD Super Amoled display in particular are being well received by American customers.

First-day sales in the United Kingdom doubled compared with that of the Galaxy S4 while in the Czech Republic, pre-orders were up 15 percent and sales had also doubled. In Germany, 1.2 times more people visited Samsung stores, the company said.

A T-Mobile store in Rotterdam in the Netherlands drew around 700 customers as early as 3 a.m. In Austria, 1.2 times more pre-orders were made than for the Galaxy S4 and local media outlets reported a huge turnout to buy the Galaxy S5, according to Samsung.

A Samsung store in Paris sold 200 Galaxy S5s within an hour after it opened on Friday and sold out its stock of 800 devices in a few hours, the company said.

A French customer, which Samsung only identified by his first name, Virgile, bought two Galaxy S5s and two Gear Fits in a Samsung store in Velizy, near Paris. He told the company that he was satisfied with the Galaxy Note 3 and bought the newer Samsung devices for him and his wife.

In New Zealand, 500 shops across the country began selling the phone on Friday and sold around 300 S5s within 30 minutes.

At some Samsung stores in India, security agents were mobilized because so many people turned out to buy the phone, Samsung said.

In Vietnam, which has a Samsung production assembly line, pre-orders for the Galaxy S5 were triple the number made for the Galaxy S4, and twice as many sales were recorded on the first day, the company said.

“The pre-orders for the phone are already at several million,” said an official at Samsung Electronics. “There is pessimism that the smartphone market has reached a maturity, but today our concern is that we might not have enough devices to sell.”

Domestic sales of the Galaxy S5 have been smooth. According to industry watchers, the country’s three major mobile operators - SK Telecom, KT and LG U+ - have sold nearly 120,000 S5s through Saturday since the domestic sales of the phone began on March 27.

Samsung is viewing it as a success since the mobile operators have been undergoing sales bans for offering excessive subsidies. Only one operator at a time is allowed to be open for business.