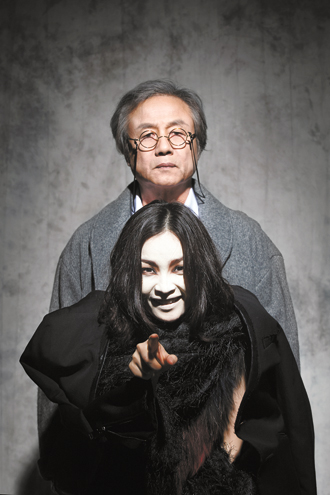 “Mephisto,” stars Jeong Dong-hwan, above, as Faust and Jeon Mi-do, below, as Mephisto. Provided by the organizer

Faust, a thinker and intellectual, has grown old trying to figure out the truth behind the universe. Frustrated with the limits of his knowledge, his journey begins when he decides to turn his back on the world.

But when the devil Mephisto appears to him, promising to indulge his every desire in exchange for his soul, the protagonist doesn’t hesitate to make the deal.

This timeless German folktale has been the basis for a multitude of literary works and adaptations, perhaps the most renowned version being Johann Wolfgang von Goethe’s play “Faust,” recognized as a great work of German literature.

It took Goethe 60 years to complete and publish his play, which revolves around Faust, a disgruntled scholar who yearns for a more meaningful existence.

But in “Mephisto,” which debuted at the Seoul Arts Center last week, the legend’s original framework is flipped, with the story told from the devil’s point of view.

For the production, playright Han Ah-reum once again joined hands with her husband, Seo Jae-hyung, to recreate the detailed and often-told German story into a 110-minute play that raises questions about man’s duplicity and the point where good and evil intersect. The two have previously worked together on several performance pieces, including musicals and even Changgeuk, or Korean opera.

But unlike Goethe’s original play, in which Faust confesses his sins and is ultimately saved despite the fact that he was tempted by the devil, “Mephisto” touches on the idea that “evil is inside all of us.”

“Did I cling onto him or did he call me out?” Mephisto wonders in one of the scenes.

According to Han and Seo, the core of their play revolves around that central question the devil presents.

Humans often blame an evil force when they sin or act immorally, the couple said. Their story, however, emphasizes the fact that the real devil is actually Faust himself.

Han admitted that she had particular reasons for telling the story through Mephisto’s eyes.

“In Goethe’s original story, Faust is enticed by Mephisto and immediately, without hesitation, exchanges his soul for earthly pleasures,” she said. “I couldn’t really relate to that. I couldn’t really understand the part where Faust is so quickly tempted by the devil. In reality, I believe people go through certain kinds of ‘steps’ in temptation. I wanted to show the Faust who goes through those steps.”

Faust the scholar is played by Jeong Dong-hwan, with Mephisto the Devil played by Jeon Mi-do. Lee Jin-hee takes on the role of Gretchen, Faust’s love interest.