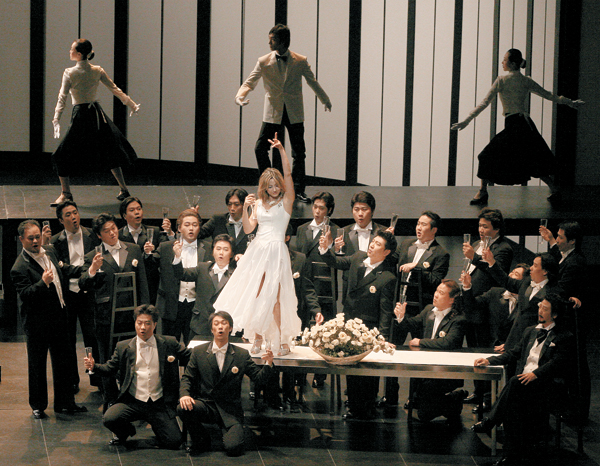 Verdi’s renowned opera “La Traviata” will be presented by the Korea National Opera at the Seoul Arts Center for the first time in eight years. The production is directed by Arnaud Bernard and accompanied by the Korean Symphony Orchestra under the baton of German conductor Patrick Lange. Provided by KNO

Giuseppe Verdi’s “La Traviata” is the most frequently staged opera in the world. But it’s the first time in eight years that the Korea National Opera will present “La Traviata,” and organizers say the version will be “violent.”

“I am thinking of a very exciting yet violent ‘La Traviata,’” said Arnaud Bernard, director for the Korea National Opera’s production. “In the past, ‘La Traviata’ was an opera that I was afraid [to direct]. That’s because it’s a very violent opera that contains a horrible story.

“The story centers around a sick prostitute and the story is both physically and mentally violent. But audiences around the world often get captivated by this opera’s magnificent staging and the costumes, and often overlook the actual story.”

“La Traviata” is based on the novel “The Lady of the Camelias.”

Bernard says he will make sure that the Korean audience will be absorbed into the story.

“This opera is very violent and abusive,” said Bernard. “I also have children and if I imagine someone messes around with my daughter, I think I’ll explode and be out of my mind. I can even kill that person.

“But so far, there were not many operas that could properly show this kind of violence and agony of a person. Opera is not a concert where actors or singers are adorned with beautiful costumes and decorations. It’s a theater. But these days, I see less theatrical elements in operas.”

Bernard’s drive to show the raw violence of “La Traviata” seems to be working on the performers as well. Tenor Joseph Kang, who will be taking the role of Alfredo, said he’s losing weight every day and even ends up with a few bruises after rehearsals.

“We’ve been rehearsing together for about a week now, and I’ve been losing weight and getting bruises on my elbows and knees,” said Kang. “I like acting and I don’t think I am in fact second to none when it comes to acting among opera singers, but director’s requests are out of my imagination.

“At first, I thought it was not possible to show such violence in acting while singing, but it does work.

“I can assure the Korean audience that they are going to see a very different ‘La Traviata.’”

Soprano Joyce El-Khoury, who will be playing Violetta, agreed that the story of “La Traviata” should be performed with emphasis on the violence.

“I was very happy to hear from my colleagues what the vision is for this work because I also really strongly believe that it’s a very physical show. I also agree that it’s not a beautiful story and it should be told in a very violent way.

“Therefore, at the end of the performance, I should be collapsing in exhaustion,” said El-Khoury.

El-Khoury explained that her character, Violetta, the Parisian demimondaine, is like the “eye in the center of a big thunderstorm” and added that it’s really “important that the public sees that.”

As far as costumes, Bernard says he wanted to make them as simple as possible.

“I tried to simplify in the visual aspect,” said Bernard.

“Simple, however, does not mean the visual aspect of the opera will be scanty. I adopted simplicity to an extent that it doesn’t interrupt the audience from getting absorbed into the story.”

The costumes are still “showy,” said Bernard, “but not as showy as the Louis XIV style.”

“I can say it’s modern but not contemporary,” said Bernard. “It’s a Christian Dior style that expresses the modern 19th century. I believe it is easier for modern audiences these days to approach opera of this kind.”

“When Verdi wrote this opera, he wanted the singers to wear costumes that represent that era. But the costumes failed to pass a censorship so the singers had to wear dresses of Louis XIV style,” said Bernard.

“Verdi could not see the ‘La Traviata’ he had intended in his time. He wanted to show how the society of that time sees women and defines women.

“So I made efforts to express that for this production.”

The Korean Symphony Orchestra will accompany the performance under the baton of German conductor Patrick Lange.

“‘La Traviata’ is considered to be one of Verdi’s most important works,” said Lange.

“It contains deep and abundant content and fully expresses women’s psychology and emotions. Verdi managed to express that in such a beautiful melody that it makes this opera more significant.”

Lange has worked on “La Traviata” for different productions, including in London, Sydney, Berlin and Hamburg.