Foster care touted as an alternative to orphanages

Foster care touted as an alternative to orphanages 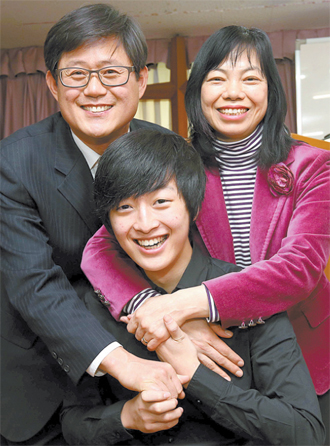 Jeong Sang-dae’s mother left him at an orphanage when he was only 4 years old. His father abandoned the family when Jeong was an infant, and a few years later his mother fell ill and was unable to provide for him.

In the orphanage, Jeong was housed in a room with nine other boys. As the youngest among them, he was forced to clean and take out the trash, and the oldest boy, a middle school student, often beat them up for no apparent reason.

His mother returned to collect him about four years later, but he was only with her for two months before she become sick again and he had to be sent back.

But rather than return to the orphanage, Jeong was taken by a social worker to live with Pastor Lee Won-seok and his wife Kwak Hee-ja, both now 47, along with their two biological children. Having spent most of his childhood in state care, living with a family was unfamiliar, but Jeong quickly adapted to his new environment.

About 10 years have passed since Jeong was placed in foster care. This year, he entered college.

“Until 10 years ago, I didn’t know what it was like to have people on my side,” he said. “Now I have people in my life like my parents.”

The UN Committee on the Rights of the Child (CRC) recommended in 2003 that Korea incrementally expand its group home system and increase support for foster homes, an assertion that has long been echoed by child care experts.

Advocates argue that sending children to foster homes or putting them up for domestic adoption is a better alternative than staying at an orphanage, many of which are overcrowded.

“It’s been 10 years since the UN recommended implementing a foster care system, but that system still looks incomplete,” said Yu Mi, an official from ChildFund Korea. “[The authorities] should initiate a foster home system first and foremost because that way children can be looked after on a one-on-one basis in stable environments.”

“It’s ironic that many babies are still adopted to parents in foreign countries when Korea’s low birthrate has been brought up as a social problem,” said Noh Chung-lae, a professor in the social welfare department at Ewha Womans University. “The authorities need to strengthen tax benefits or support funds for those who adopt babies to spur domestic adoptions.”

The ultimate goal of the foster home system is to send children back to their birth parents. However, only 12.9 percent came back to live with their birth parents in 2012, down from 19 percent in 2006. Most children living with foster families stay with them until they’re legally adults and sometimes even later.

Many child care advocates insist that’s precisely why the government should establish a system in which single parents can raise their children without giving them up. According to research conducted in 2011 by the Ministry of Gender Equality and Family, 46 percent of unwed mothers had debts averaging around 13 million won ($12,514), with an average monthly income of about 785,000 won.

Still, advocates argue that the current system is inefficient and that the government must expand its scope.

Unmarried mothers with financial difficulties are also more likely to put their children up for adoption.

“There should be social support for unwed mothers so that they can raise their children without being shamed,” said Mok Kyung-hwa, president of Miss Mommamia, an association of unwed mothers. “In Korea, the welfare system provides little to single mothers but gives generous handouts to adopted babies or children staying at foster care facilities. There is no other country in which support increases the more children are abandoned.”

Scandinavian countries have the highest rates of children born to unwed mothers out of all developed nations. In Sweden, for instance, single mothers are fully supported by the government and receive child care benefits as well as financial assistance. Fathers are also liable for support.

“The most important thing is to provide welfare benefits to single mothers so that they can become financially independent,” said Lee Yang-hee, a professor of child psychology in the education department at Sungkyunkwan University. “Before sending children to foster homes, there should be a welfare system that supports birth parents so that they can raise their own children.”