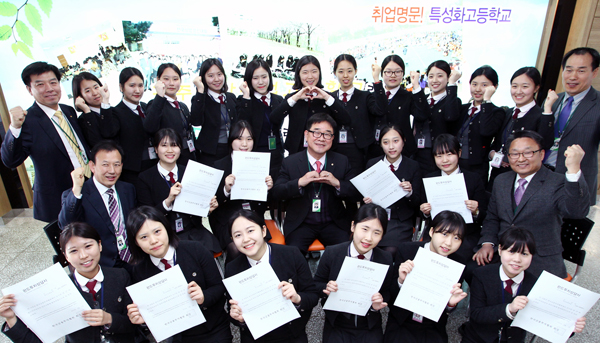 GWANGJU - Hwang Su-bin, a sophomore at Gwangju Girls’ Commercial High School, obtained a license to become a securities investment consultant on March 14. She also passed the fund and derivative investment consultant certification tests in January and February, a difficult feat even for college graduates who studied business.

These three certifications are granted to people who pass certain tests offered by the Korea Financial Investment Association. They are the most desired certifications among people who want to get a job in banks or brokerage firms or as an investment consultant for funds, stocks or derivatives.

Hwang’s parents divorced when she was just 6 years old, and she was raised by her grandparents, who lived on the basic living subsidy given by the government. She didn’t expect to go to college, so she knew she had to get the certifications if she wanted a well-paying job.

“Those certificates are necessary to be employed in the banking or finance industry,” Hwang said. “I bit the bullet and went to school at 8 in the morning and came back home at 9 p.m. I studied even on vacation.”

“I wanted to land a high-paying job to help support my grandparents,” she said. “But my grandmother passed away two months ago.” She is now living with her father, a taxi driver, after living apart for the past 10 years.

There are 35 students at Gwangju Girl’s Commercial High School who earned the three types of investment consultant certifications. Out of the 400 juniors and seniors at the school, 34 percent of the students have earned one certificate out of three, and 27 percent got two. This excludes students majoring in design.

Most individuals who take the investment consultant exam are juniors or seniors majoring in business at universities. The pass rate for university students is below 30 percent. But the pass rate for Gwangju Girls’ Commercial High School students this year was 83 percent - out of 63 students who took the tests, 52 passed. That’s even more impressive when you consider the students’ backgrounds. About half of the 800 students at the school are from poor households and attend tuition-free. Their middle school grades were largely middling.

But when they get into Gwangju Girls’ Commercial High School, the passion and devotion of their teachers encourages them to become high-achieving students.

“Just a few years ago, this school was under the threat of closure due to the unemployment crisis and difficulty in student recruitment,” said Na Jeong-sik, the principal of the school. “The whole staff pulled together to change the situation.”

Teachers made an effort to get closer to their students and excite their ambitions. They resurrected a home-visit project at the beginning of every semester that had been on the shelf for 27 years.

The school opened its cafeteria for breakfast for students who had to travel a long way from home. The entire faculty - including the principal - opened social media accounts to communicate with the students and listen to their problems. Five teachers who were in charge of finance classes passed the certification tests about five years ago so they could better teach the students how to do it. The school even provided cram books to the students to better prepare them for the test.

As a result, 20 percent of the 200 graduates this year got hired by financial companies or public enterprises. Two of them were hired by the Korea Exchange, which operates the stock exchange and is renowned for its generous paychecks.

“Every year, 30 to 40 students in other schools try to transfer to our school,” said Na, the school’s principal.