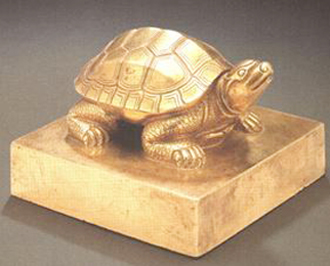 The Korean government is actively negotiating the return of valuable Joseon-era royal and national seals with the United States ahead of President Barack Obama’s visit to Korea later this month, according to sources in Washington.

“There is an active ongoing discussion with the U.S. government on the return of the Daehan Empire national seals and Joseon Dynasty royal seals,” a source said.

Korea is seeking the return of 11 known royal and national seals in the United States, including one in a museum and 10 under government care. Most of these seals were taken out of the country following the 1950-53 Korean War through unofficial means.

These seals, stamps used to authorize documents in lieu of signatures, are from the Joseon Dynasty (1392-1910) and the Korean Empire (1897-1910), sometimes called the Daehan Empire, referring to the final years of the Joseon Dynasty when the country declared itself an empire in an attempt to defend its sovereignty from neighboring countries.

“There is the likelihood of good news” in regard to the return of the seals, a source added.

It is not yet clear, however, if the seals can be returned to coincide with Obama’s trip to Seoul, especially in light of legal procedures.

“In the case an individual or a group is in possession, legal steps have to be taken and will be dependent on the procedures at the U.S. Department of Homeland Security or the Department of Justice,” another source said.

Last November, agents from the U.S. Immigration and Customs Enforcement’s Homeland Security Investigations (HSI) directorate seized nine seals from the family of a deceased U.S. Marine lieutenant who served in the Korean War.

Korea’s Cultural Heritage Administration said the Marine apparently found the seals in a ditch near Deoksugung Palace in Seoul in 1950, after it was ransacked by Chinese and North Korean soldiers.

According to the heritage administration, the nine seals include two national seals from the Korean Empire, whose year of manufacture are known, two royal seals from the Joseon Dynasty and five signets of Joseon.

These include the Hwangjejibo (Seal of Emperor), a national seal made upon the establishment of the Korean Empire in 1897 and the royals seals of Yuseojibo (Seal of Yuseo) and Junmyeongjibo (Seal of Junmyeong), used on nomination documents for government officials in the Joseon Dynasty.

The Los Angeles County Museum of Art said last November that there was “credible evidence” that its Royal Seal of Queen Munjeong was also “removed unlawfully” from a national shrine in Korea during the Korean War before it was acquired by the museum. It further indicated that it is open to returning the seal to Korea.

Korean-Americans filed an online petition to the White House last month for the return of the 11 seals to coincide with Obama’s trip to Seoul this month.