Finding sacred images in the wood of Korea

Finding sacred images in the wood of Korea 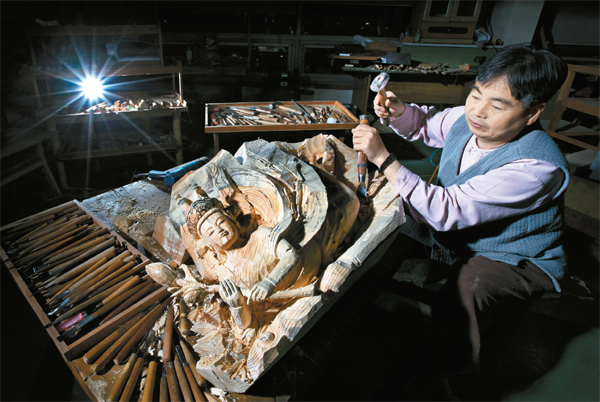 The bulmo, or Buddhist artist, Heo Kil-yang carves a “Heavenly Maid” sculpture in his atelier in Paju, Gyeonggi. To create Buddhist sculptures, he goes through an elaborate process, including cutting, trimming and chiseling.

Throughout time, many Korean artists have found artistic inspiration from Buddhism. For more than 1,000 years, Buddhism permeated into the everyday life of Korean people, and thus Buddhist art prospered all around the peninsula.

Those who carve the statue of Buddha are called the bulmo, which literally means “the mother of Buddha.” The name came from comparing the strenuous process of carving a statue of Buddha to a mother giving birth to a baby.

This year, artist Heo Kil-yang celebrates his 46th year as a bulmo. Having devoted his entire life to creating Buddhist art, he is a quintessential figure in the Buddhist arts.

Heo’s life is inseparable from Buddhism. Born to a devout Buddhist mother in Suncheon, South Jeolla, he spent a year in Seonam Temple as child monk before starting elementary school. Surrounded by Buddha’s teachings, he naturally thought of entering the Buddhist world; but, instead of becoming a monk, he discovered his true talent: carving. 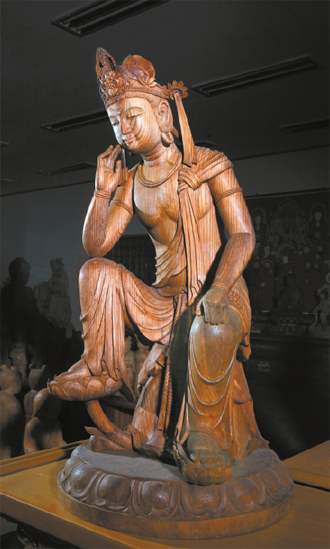 When he reached 15 years old, he went to Seoul and started his life as a Buddhist artist. He was lucky to learn the basics of Buddhist art from the nation’s most prominent figures: He learned woodworking from Seo Soo-yeon and painting from Lee In-ho. After nine years as a trainee, he won the grand prize in the 1977 Buddhist Art Awards for his wooden statue “Thousand Hands Thousand Eyes Avalokiteshvara.”

Winning the prestigious award was a huge accomplishment for the 24-year-old. But despite receiving so much praise, Heo still felt a thirst for Buddha’s teachings. That’s when he approached the monk Woo-il (1910-99), one of the most celebrated Buddhist artists in Korea, who taught him about Buddhist artists of the Joseon Dynasty (1392-1910).

Art critics consider Heo to be almost the only artist today who can depict the principles of traditional Buddhist art in Korea.

How then did Joseon’s Buddhist artists create their statues?

“Only the right kind of wood can be turned into Buddha’s body,” said the 61-year-old artist.

This involves more than selecting the type of wood; after choosing the material, the bulmo should go through a series of rituals to get rid of the wood’s evil spirits.

“You would need to spread out red clay, then a bronze mirror and a Buddhist flag should be placed nearby. Before cutting the tree down, religious rituals for mountain and tree spirits should also be held,” he said.

Upon completing the rituals, the sculptor starts to carve the wood. Once it takes shape, he soaks the wood in a herbal bath for a day, and after drying it, he covers it in a special lacquer. Only after countless brush strokes of lacquer is the statue covered with gold leaf. The bulmo’s job finally done, and monks can then begin the enshrinement ritual.

“Creating a new Buddhist sculpture requires a lot of effort, almost a year,” he said.

With more than 1,000 works to his name, Heo’s statutes can be found all over Korea.

To art critics, Heo’s works reflect not only an in-depth understanding of Buddhist doctrine, but also a unique artistic taste.

“I wish to blend the traditional Korean Buddhist art style into today’s culture, so that Korea’s younger generation can also cherish and preserve the Buddhist arts,” Heo said.

Looking at Heo’s collection, it seems like just a matter of time before his works will be added to the cultural assets of 21st-century Korea.