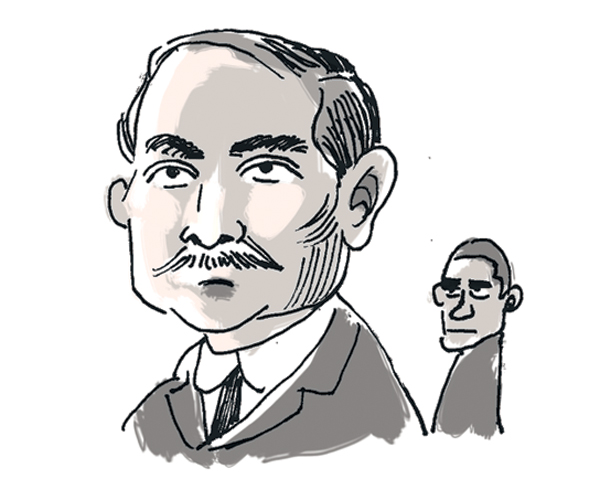 At a transitional period in world politics, encapsulated by a remarkable shift in the balance of power, anxiety over uncertainties dominates the world. We may be passing through a very turbulent period. When faced with such a critical moment, a country may be tempted to look back and try to recover its past glory - instead of marching forward by developing future-oriented strategies. Global powers are more prone to reminisce about the good old days and their mighty influence during the era of imperialism and the Cold War period.

With Russian President Vladimir Putin and Japanese Prime Minister Shinzo Abe, we can read strong signs of nostalgic aspirations for the glory of their imperial and Cold War days. Putin, who publicly proclaimed that the collapse of the Soviet Union was a “major geopolitical disaster of the century,” would have been frustrated with the global standing of today’s Russia when compared with the Cold War days, when the country shared bipolar superpower status with the United States. He might be gripped with the urge to restore the Golden Era of the Russian Empire. His bold move and challenge to the West by violating Ukraine’s territorial sovereignty through the de facto annexation of Crimea puts him somewhere between Peter the Great - who created the Golden Era of Russian culture - and Tsar Nicholas I - whose reckless expansionism ended up isolating Russia from other European powers. Therefore, it is hard to predict how Putin’s designs for a new Russia will affect the peace and prosperity of the international community.

Abe’s revisionism appears to be directed at Japan’s 150 years of modern history and its two historical turning points in hopes of reassessing history to establish a new national strategy. In its first “golden age,” Japan grew to be a hegemonic power in Asia through modernization and Westernization, beginning with the 1868 Meiji Restoration, but its militarist ambitions cost the country a heavy price and brought about its humiliating defeat in World War II. The second era arrived when Japan reinvented itself as a wealthy democratic state. In just one generation, the country became the second economic power, after only the United States, and a key player in the rich and powerful G-7 as well as the United Nations and many other international organizations. Over the last seven decades, Japan exercised economic and cultural predominance regionally and globally.

The nationalist politician returned to the prime minister’s office for the second time two years ago at a time when Japan was in its worst postwar times, following the aftermath of a catastrophic earthquake and tsunami that knocked out the country’s nuclear power network. His promise of a stronger nation comforted and emboldened the people during a time of crisis. But his call for renewed patriotism and the revival of the past days of glory also meant whitewashing the history of the war. He was undoing and undermining Japan’s status as an economic and cultural power based on a pacifist Constitution and democratic system. Because he has been too engrossed in rewriting the postwar legacy, he has neglected Japan’s bigger role of contributing to regional peace and co-prosperity. He could jeopardize Japan’s hard-won respectable international status if he goes on with denying history and being preoccupied with past glory.

Global powers are revisiting their history out of insecurity toward the new international order after China’s rapid ascension on the global stage. China, which had been the center of the Asian continent for thousands of years with political, cultural and military predominance, was shamefully violated by imperialist powers and pushed to the periphery over the last century.

But in the last few decades, the country made a fast and decisive comeback to the center stage. Fifth-generation President Xi Jinping has touted the “Chinese dream.” The world can only hope that China’s new dreams and aspirations are in sync with the universal, peaceful common goals underscored by Sun Yat-sen a century ago - not the pursuit of the lost power of Great China.

The United States owned the 20th century. It enjoyed unipolar status in politics, culture and economy after having led the victory in two global wars and the ideological period. But it lost much of its mighty influence - and face - after the Sept.11 terrorist attacks in 2001, the financial meltdown of 2008 and a government shutdown last year due to a legislative standoff. The waning U.S. hegemony paved the way for multilateral polarity in the international political system. President Barack Obama shifted security and foreign policy toward Asia to pit against the rising influence of China. But Washington and public opinion should abstain from applying the Cold War mentality and regarding China with the same suspicions as the former Soviet Union.

Geographically, the Soviet Union had been a peripheral part of Europe, while China is the center of Asia. China has ascended not in the age of ideological confrontation, but in the days of market globalization, which inevitably accompanies liberalization. The United States must have confidence in China to work together to ensure a new peaceful order around the globe. There is no reason why the dreams of the Chinese and Americans have to be different.

*The author is former prime minister and adviser to the JoongAng Ilbo.