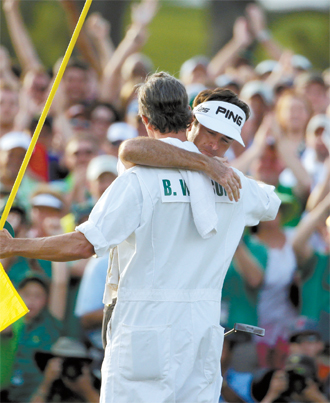 Bubba Watson withstood an inspired early challenge from playing partner Jordan Spieth to clinch the Masters for a second time in three years with a three-shot victory at Augusta National on Sunday.

Trailing the prodigiously talented Spieth by two strokes after four holes, left-hander Watson took advantage of a stumbling run by his fellow American around the turn as he upped his own game, then maintained control on the back nine.

Watson, who landed his first major title with a thrilling playoff win over South African Louis Oosthuizen in 2012, mixed five birdies with two bogeys to card a three-under-par 69 on a warm overcast afternoon.

The 35-year-old from Bagdad in Florida, known for his distance off the tee and his audacious shot-making, covered the back nine in even par to post an eight-under total of 280.

After being warmly embraced by his caddie and shaking hands with Spieth, Watson was then congratulated greenside by his wife Angie and their 2-year-old son Caleb.

“This one is a lot different,” a teary-eyed Watson said before being helped into the revered green jacket by last year’s champion Adam Scott of Australia. “The first one for me (his 2012 Masters win), it’s almost like I lucked into it. This one was a lot of hard work and dedication. After giving away that jacket last year, I kind of wanted it back. I never loved green so much.”

Spieth, at 20 aiming to become the youngest player to win the Masters, had to settle for a share of second place with Swede Jonas Blixt at five under after signing off with a 72.

“It was so much fun, it really was,” said Spieth. “Even if I didn’t show it there on the back nine, it was. I took it all in, standing ovations for both of us to each green. It was a dream come true. “Although it sits a little hard right now, I’ll be back and I can’t wait to be back. It was an incredible experience.”

American world No. 7 Matt Kuchar, seeking his first major victory, briefly held a share of the lead after three holes but then struggled on a layout running fast and firm on the way to a 74 and a tie for fifth with Rickie Fowler (73).

German veteran Bernhard Langer, a double Masters champion, rolled back the years with a closing 69 to finish at even par, level with five others including Rory McIlroy (69) and American Jimmy Walker (70).

Spieth had been the dominant figure in the early going on Sunday with some riveting golf, four birdies and a bogey in the first seven holes.

He picked up his first shot of the day at the par-five second, sinking a left-to-right breaking putt from 10 feet, then spectacularly holed out from a greenside bunker to birdie the par-three fourth, raising both arms in celebration.

Though he bogeyed the fifth after hitting his approach into a greenside bunker, he recovered with birdies at the par-three sixth, hitting his tee shot to three feet, and at the seventh, where he coaxed in a slick 12-footer downhill.