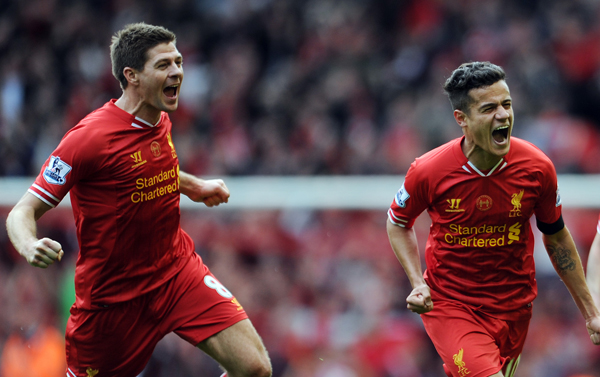 Liverpool’s Philippe Coutinho, right, celebrates with teammate Steven Gerrard, left, after he scores the third goal of the game for his side during their English Premier League match against Manchester City at Anfield in Liverpool, England, Sunday. [AP/NEWSIS]

Liverpool beat Manchester City 3-2 in a dramatic and emotionally charged game at Anfield on Sunday to move within touching distance of the Premier League title.

Demba Ba’s goal earned Chelsea a 1-0 win against 10-man Swansea City and kept them two points behind leader Liverpool with four matches left in the season.

Chelsea will visit Liverpool in a potential title decider on April 27 when victory for Jose Mourinho’s team could let in City, who trail the Merseyside club by seven points but have two games in hand.

Emotions were running high all day at Anfield as the club commemorated 25 years since the Hillsborough disaster in which 96 of their supporters died at an FA Cup semi-final.

There was a minute’s silence before kick-off and captain Steven Gerrard, whose 10 year-old cousin was one of those killed, finished the afternoon in tears before gathering his team in a celebratory huddle.

Gerrard refused to talk up the possibility of Liverpool’s first title since 1990 after leading his side to a 10th successive victory.

“That win means so much, that is such a big result for us,” he told Sky Sports. “But nothing is ours yet. The important thing now is not to get carried away with that result.”

Manager Brendan Rodgers, who has revitalized the team in two seasons since taking over, hailed “a remarkable performance.”

“I thought we were incredible today,” he said. “We showed so much spirit and quality. We have been put under pressure in a very big game, but you can see from the quality of our football that we are coping with it.”

British bookmakers reacted to the victory by installing Liverpool as title favorite.

“Today is a historic day as Liverpool have never been favorites to win the Premier League title since its formation over 20 years ago,” said a spokesman for bookmakers William Hill.

City manager Manuel Pellegrini, however, believes his team still has everything to play for.

“If we win our two games in hand we will be a point behind Liverpool, who still have to play Chelsea. The title does not finish today,” he said.

City felt they should have had a late penalty for a handling offense by Martin Skrtel, but they paid for a poor first half-hour in which they fell behind to goals by Raheem Sterling and Skrtel.

Spanish international David Silva led a City revival by scoring in the 56th minute and forcing an own goal from Glen Johnson five minutes later.

But 12 minutes from the end, a miskick by City captain Vincent Kompany gave Philippe Coutinho the opportunity to drive in the winner.

In stoppage-time midfielder Jordan Henderson was sent off for a lunging tackle at Samir Nasri and he will miss three of the last four games.

The crucial one of those looks to be the visit of Chelsea, who labored to beat relegation-threatened Swansea despite playing most of the match against 10 men.

Chico Flores was sent off for two yellow cards in the first quarter of an hour, the Spanish defender’s second dismissal in six weeks.

Chelsea dominated from then on but could not break through until Ba, whose goal knocked out Paris Saint-Germain in a Champions League quarter-final on Tuesday, scored in the 67th minute.

“Patience was the key today,” their captain, John Terry, told Sky Sports. “The pressure is still on the teams above and below us.”