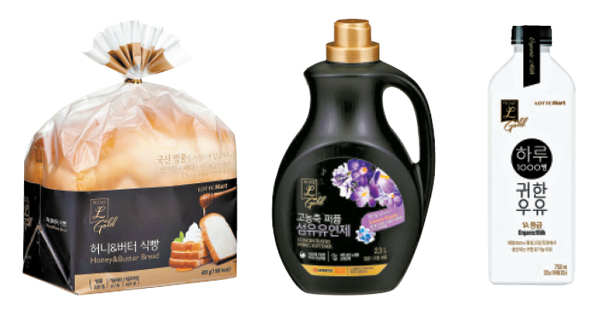 Gone are the days when private-brand (PB) items at large discount stores were tossed aside as cheap alternatives to products manufactured by national brands. In an effort to counter falling profits, local chain stores are increasingly devoting their time and money to developing PB items to offer consumers more choice in quality and price - and Lotte Mart is in the lead.

On Sunday, the retailer said that it will be launching a new PB line this week, called Prime L Gold, targeting consumers wishing to buy premium items. The new line comes at a time when despite the sluggish economy, sales of premium goods, including organic items and low-salt ingredients, have increased by more than 20 percent in the first quarter of this year compared to last year.

“Sales figures show that consumers are willing to spend on healthy food items, even if they cost a little more,” said an official from Lotte Mart, a large discount store chain owned by Lotte Group.

In the past, PB products were considered low-cost alternatives to national brands, and consumers tended to buy PB items because they are usually cheaper. But the trend is changing. According to Daymon, a consulting company that specializes in PBs, consumers said in a 2008 survey that of the three reasons why they purchase PB products - price, quality and design - 47 percent said it was down to price. In 2013 the same survey showed that 52 percent said quality was the main reason they bought PB.

“There is a growing demand for premium products,” the Lotte Mart official said. “Consumers care more about quality than price even in PB items.”

The Prime L Gold label will begin selling three items on Thursday at Lotte Mart stores nationwide. One of the products is a 750-milliliter (0.20-gallon) bottle of high-quality milk from a farm in Pyeongchang, Gangwon. Only 1,000 bottles will be for sale per day at a cost of 4,500 won ($4.32) each - more than double the price of milk sold under Lotte Mart’s own label.

The retailer also said it will sell a loaf of sliced bread (2,000 won) baked with local honey and fresh cream and butter. It will also sell a fabric softener under the label for 8,900 won and plans to release 20 more items.

“As a mid- and long-term strategy, what’s needed for large discount stores to enhance competitiveness is to develop PB items that differentiate them from their rivals,” said Nam Chang-hee, head of products at Lotte Mart. “We plan to increase sales of premium PBs so that it accounts for at least 10 percent of total sales from PBs this year.”

Along with Lotte Mart, Homeplus is also focusing on its PB items. Last year, PB products accounted for 24.5 percent of sales, up from 23.7 percent in 2012. E-Mart, the store chain operated by Shinsegae Group, also plans to increase its sales of PB items from 24 percent of its total sales last year.