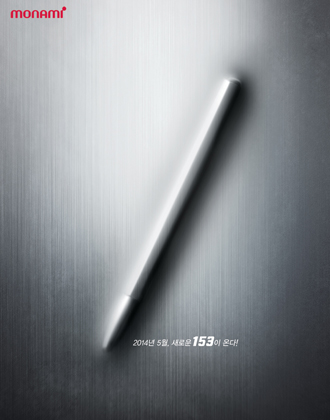 Monami, a manufacturer of stationery, writing instruments and printer and office supplies, said yesterday that it will release a new edition of its iconic 153 ballpoint pen next month to celebrate its 51st anniversary.

“We are very thankful for the people’s love of calling our 153 ballpoint pen the ‘people’s ballpoint pen’ for 50 years,” said Monami CEO Song Ha-kyung in a press release.

“We think that by developing the next product, which is different from the existing 153 models, we can receive the people’s affection for the next 50 years to ensure our customer’s support.”

Song said he realized the status of Monami’s 153 ballpoint pen after the company sold out of its limited edition 50th anniversary pen last year.

It featured a brass and nickel barrel and high-quality German ink. The limited edition is now selling for more than 100,000 won in the online used-item trade market.

The 153 ballpoint pen is the flagship product of Monami.

The name originated from its price in 1963 of 15 won and the fact that it was the third product ever made by the company.

Monami has sold more than 3.6 billion units in the past 50 years, according to the company.

Monami hasn’t revealed details of the upcoming edition of the 153, but the company said in its release that the new pen will bring excitement with its nontraditional material and design. The original 153 is defined by its hexagonal shaft and black push-button design.