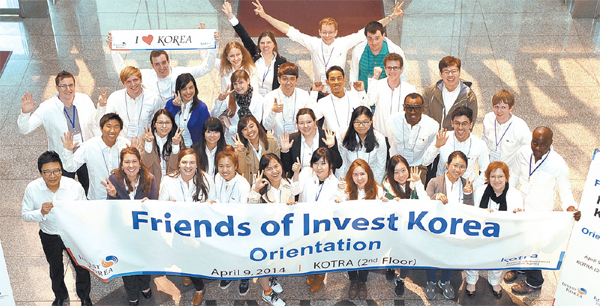 Invest Korea supporters and Commissioner Han Ki-won (bottom left) are posing in front of a camera on April 9 at Kotra’s lobby. Provided by Invest Korea

“I heard about the Friends of Invest Korea program through my school and decided to apply because I’ve always been interested in the Korean economy,” said Viktor Korulski, 24, from Switzerland, who is studying international relations at Yonsei University.

“Since I study business administration, I wanted to learn the practical side of business. Given that Korea has quickly developed within a short period of time, I thought I would be able to learn a lot by participating in the program,” said Ravaka Iharielimampandry, another exchange student from Madagascar at Gangnam University.

Organized by Invest Korea, the national investment promotion agency under Kotra, the workshop aims to give foreign students an opportunity to explore the Korean economy. This is the second year of the program and the focus is on diversity, with students from 25 countries such as the United States, Vietnam and Poland. Most of them are either undergraduate or graduate students in their 20s or 30s who are studying at Korean universities. The program consists of monthly meetings for five months on the Korean economy, its competitiveness and the importance of foreign direct investment (FDI).

During the trip to Songdo, students visited two companies considered to be successful examples of foreign businesses in Korea: Cisco Global Center of Excellence (GCoE) and Berna Biotech Korea. Both are located in the International Free Economic Zone, known as IFEZ, where foreign companies receive incentives like cash grants and tax breaks to locate there.

As soon as the bus arrived at Songdo, some students were astonished by the skyscrapers and took pictures to remember the scene.

Cisco Systems is an American multinational headquartered in San Jose, California, that designs, manufactures and sells networking equipment. Cisco Korea commenced operations in 1994 in Samseong-dong, southern Seoul. It had about 500 employees and 1,086 business partners as of September. Cisco GCoE is a Smart City Solutions R&D Center that opened in October.

“Cisco officially opened the center in Songdo, where the development of smart city solutions can take place,” said Ben Chung, Cisco GCoE manager in a presentation. “With the help of IFEZ authorities, we could take full advantage of launching our business here in Songdo with developed infrastructure and skilled manpower.”

The students seemed impressed. “The place was highly IT based and very futuristic,” said Alex Lintzenich, 31, from the United States. “I could feel that Korean IT technology has really reached the top level.”

“The company’s will to become the number one IT company in the industry was impressive,” Korulski said. “Their smart houses and smart rooms seemed really cool.”

During the trip, the students also visited Compact Smart City, an exhibition venue that showcases the history of Incheon with its vision for the future.

“We literally built a city on top of the ocean in 10 years, and we have met a lot of foreign investors who were impressed by our progress,” said Lee Woo-hyun, an official of the IFEZ authority.

Songdo has attracted international organizations, such as the World Bank Korea and the Green Climate Fund (GCF). Foreign universities that have branches in the IFEZ or plan to set up shop there are SUNY Stony Brook, George Mason University, Ghent University and the University of Utah, according to Lee.

“The resident registration population of Songdo reached 75,000 in March, and this vitalized the real estate market here,” he said. “We are about halfway through the Compact Smart City project, which we hope to finish by 2020 to become the center of Northeast Asia international business.”

After a brief tour at the exhibition, Korulski said, “I was very impressed by the Incheon Free Economic Zone project. It seemed like the IFEZ authorities were very ambitious to achieve the most developed smart city in the world.”

When asked about Invest Korea’s efforts to promote the program and FDI, workshop director Kim Myung-soo replied, “We are planning to nominate Invest Korea Supporters annually from various countries as honorary ambassadors of Korea and the Korean economy. The workshop will offer them an opportunity to see places like IFEZ and experience the selling point of Korea.”

On the way back to Seoul, the students busily shared their SNS information.

“We will make the best use of social network services such as Facebook to promote the program; we plan to run our own Facebook page and post group activity pictures so anybody who joined the program can share not only with the members but also with their Facebook friends from their home countries. Some students’ well-written accounts also are going to be posted on our website for anyone who is interested in Korea and the Korean economy,” Kim said. “We hope the workshop can attract foreign interest in the Korean economy, encourage FDI and boost the nation’s economy in the long run.”