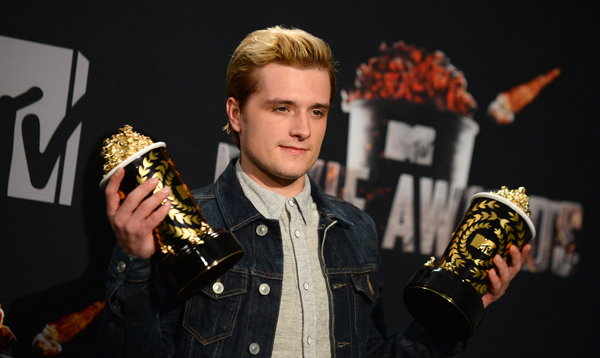 Josh Hutcherson won awards Sunday for best male performance and movie of the year for “The Hunger Games: Catching Fire” at the MTV Movie Awards. [AP/NEWSIS]

Plenty of golden popcorn-shaped prizes were handed out at the 22nd annual MTV Movie Awards, but it was the summer movie teasers, and the stars attached to them, that really had Hollywood excited.

Ellen Page, one of the stars of the upcoming “X-Men: Days of Future Past,” introduced a clip from the film that sees the X-Men joining forces with their younger selves.

In the tease, some X-Men attempt to battle ruthless metal monsters using their special abilities. It’s the first appearance for some of the mutants - Blink, Sunspot, Warpath and Bishop.

The MTV Movie Awards have become the ideal platform for the Hollywood studios to promote their summer movies, and this year was no exception.

First-look footage from “The Fault in Our Stars,” starring Shailene Woodley and Ansel Elgort, showed the beginnings of the on-screen couple’s romance in the heartfelt comedy.

Jared Leto presented Mila Kunis with the award for best villain for “Oz the Great and Powerful.”

“You just made my 12-year-old self dream come true,” Kunis said. “And I just realized I’m the only woman nominated and I won.” Receiving this year’s trailblazer award was Channing Tatum. The first male to gain the honor after Stone and Emma Watson, Tatum accepted the award from his “Jupiter Ascending” co-star Kunis and his “22 Jump Street” co-star Jonah Hill.

“I witnessed the generosity of his heart every day I was with him,” she said.

“He wanted to make a difference in this world. His charm, wit, spirit and his beautiful smile will live on.”

Clips from a number of his films and a glimpse of footage of the actor accepting the MTV movie award for breakthrough male performance in 2002 were shown.

“I’m always going to be here for you even when you tell me to go,” Vin Diesel said in a video clip. “That’s who Paul Walker was.”

Mark Wahlberg collected the generation award. “I know what this really means,” said Wahlberg, adding that this is the award that signifies “You’re done.”

Host Conan O’Brien kicked off the ceremony with a challenge to gain 50 celebrity cameos for his opening segment, a shtick with Will Arnett that merged two categories - best fight and best kiss - and a musical number about hating musical numbers in big awards shows.

Walking out to a track by rapper Rick Ross, O’Brien joked that he was almost injured by the show’s flashing pyrotechnics.

“Fire, explosions and rap music: all things you associate with Conan O’Brien,” he deadpanned.

The MTV awards had some stiff competition from other networks on Sunday night, including the latest installment of HBO’s popular “Game of Thrones” and the final season premiere of AMC’s “Mad Men.”