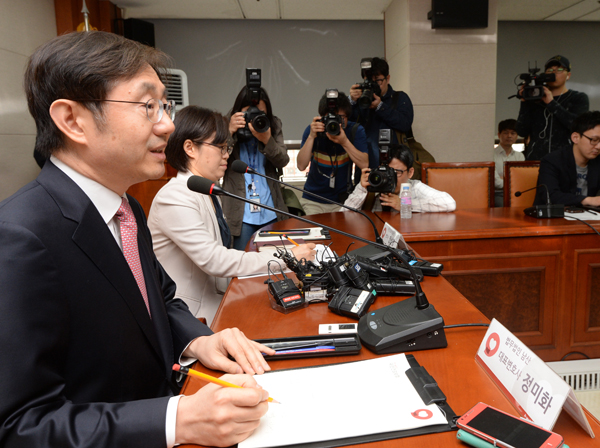 Lawyers for the National Health Insurance Service explain a petition against three global and domestic cigarette companies yesterday at a press conference at the NHIS’s headquarters in Mapo District, western Seoul. [NEWS1]

The National Health Insurance Service (NHIS) filed a suit with the Seoul Central District Court against Korean branches of the foreign cigarette makers Philip Morris International and British American Tobacco, as well as the largest local tobacco firm, KT&G, for the medical costs of lung and throat cancer patients who have smoked for at least three decades.

This is the first time a state agency has filed a lawsuit against tobacco firms either in Korea or the other 36 countries of the World Health Organization’s Western Pacific Region.

The agency said it will make use of data from lung and throat cancer patients’ general medical examinations, records of patients registered at the National Cancer Center and the Korean Cancer Prevention Study to back its case.

The NHIS said it spends at least 1.7 trillion won a year on health care related to smoking and anticipates such smoking-related medical expenses to increase in the future.

This follows a Supreme Court ruling on Thursday in a separate suit that there is not a causal link between cancer and cigarettes.

The top court ruled in an appeals trial ending a 15-year legal battle between the smokers and KT&G that the tobacco company is not liable for damages because it did not engage in unlawful practices such as hiding the risks of smoking or misleading consumers.

No plaintiff has won in a tobacco-related case in Korea thus far.

But the NHIS said that the Supreme Court’s ruling would not dampen its chances of winning because it has collected extensive data to prove the correlation between smoking and cancer.

The NHIS’s board of directors earlier decided to file the suit at a meeting on Jan. 24.

The health insurer indicated it will have a stronger claim as it will base its suit on a Big Data analysis of the amount of money spent on lung and other smoking-related cancer patients over the past decade, as well as studies from experts and international bodies, including the World Health Organization.

NHIS lawyer An Sun-young told reporters yesterday: “We will prove the tobacco companies’ illegal acts and the concrete causal relationship between smoking and the diseases through the results of research using a Big Data analysis on the harmful effects of smoking, consultations with experts here and the cooperation of the WHO.” She added that the NHIS as a responsible public health organization “has a natural duty to file this tobacco lawsuit.”

“The NHIS lawsuit already includes documents revealed by Philip Morris and BAT from tobacco suits abroad, and the NHIS also has a lot of medical records,” said Chung Mi-hwa, another attorney representing the NHIS, from Lim, Chung & Suh, Attorneys at Law. “So, unlike in a civilian lawsuit, there is a higher chance of winning the case.”

The three tobacco companies were not immediately available for a response.

KT&G, originally Korea Tobacco and Ginseng, was run by the state until it was privatized in 2002. It has a market share of about 60 percent in Korea, while the other two tobacco firms combined hold a third of the market.