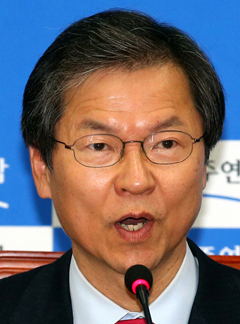 The New Politics Alliance for Democracy (NPAD) unveiled five principles for election nominations yesterday, aimed at replacing the large number of incumbent officials in the local government it said do not measure up.

“We will make sure that the party will not field candidates with histories of unethical behavior condemnable by the people,” said Chun Jung-bae, a former justice minister who now heads the NPAD’s nomination evaluation committee for the June 4 local elections.

The five principles were affirming the party’s dedication to grass-roots politics, pledging that sitting lawmakers would not interfere in the nomination process, conducting in-depth examinations of an incumbent’s performance, forming a committee to vet potential nominees and working to find nominees to represent a range of social minorities and disadvantaged groups.

Political observers said that the move appears to be an attempt to rebuild the party’s image as reformers after last week’s decision to have party nominations for the coming local election.

Opposition and ruling politicians had promised in a 2012 campaign promise to eliminate party nominations, but the NPAD went back on its promise, following a similar move by the Saenuri Party in February.

“We will do our job with utmost fairness based on principles without consideration of any vested power or bias so as to lay a stepping-stone worthy of new politics,” Chun said.

As part of those principles, the party said those with records of criminal misdeeds, including fraud, election law violations and bribery, would not receive nominations from the party.

It also said that those who have more than two convictions for driving while impaired would be barred from running under the banner of NPAD.

“We will reflect on the results of a multifaceted evaluation into local councilors and government chiefs of their performances over the past four years into our assessment process,” said the party in a statement released yesterday.

The NPAD’s announcement reportedly stems from the party’s co-chairman Ahn Cheol-soo, who is trying to showcase his commitment to pursuing a new era of politics by bringing about sweeping overhauls in the nominations and to recover his image as a political reformer, which was tainted by the party’s about-face on the election promise last week.

It also fueled speculation that as many as 20 percent of sitting elected officials at the grass-roots level could be replaced by new faces, unnerving many NPAD politicians nationwide.

Lee Kye-ahn, a former lawmaker and an aide to party leader Ahn, said on a radio interview on PBC yesterday that “more than 20 percent of incumbent Seoul council members and district office chiefs could be replaced” by those who could “appeal better to the voters.”

With the sweeping reforms in the nomination process, a tug of war between Ahn loyalists and former Democrats is expected.

Of particular interest is how those with ties to the Roh Moo-hyun faction inside the NPAD will respond to the party’s nomination process should it turn out that the committee does not give them nominations.