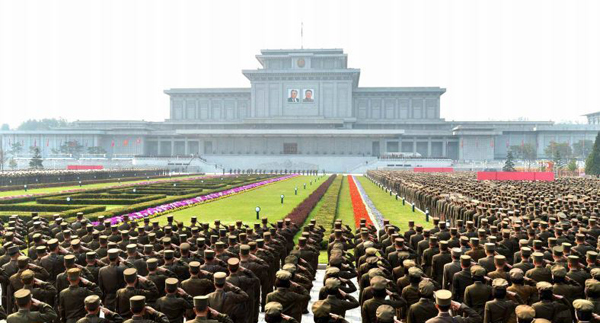 The Rodong Sinmun reported yesterday that soldiers from the North’s army, navy and air force swore allegiance to leader Kim Jong-un on Sunday at the Kumsusan Palace of the Sun ahead of founder Kim Il Sung’s birthday today. [Rodong Sinmun]

North Korea has moved a mobile rocket launcher to its east coast in apparent preparation for a missile launch ahead of the anniversary of the birthday of the nation’s founder, Kim Il Sung, today amid ongoing South Korea-U.S. joint military drills, a source told the JoongAng Ilbo yesterday.

“We discovered that North Korea is moving a transporter erector launcher (TEL) toward the east coast, which had previously been deployed at its central front,” a high-ranking South Korean government official said yesterday. “North Korea made similar moves before the launch of its short-range FROG rockets and KN-09 ballistic missiles in late February and early March.”

To prevent a possible military skirmish, officials said several aegis destroyers have been deployed in its waters and that its Green Pine radar system is working.

Since Feb. 21, following the two Koreas’ conclusion of joint reunions for families separated during the 1950-53 Korean War, Pyongyang has launched about 500 shells from artillery and rocket launchers, 100 of which landed in South Korean waters, as well as short-range rockets, missiles and two medium-range projectiles that are assumed to be Rodong missiles, toward international waters off its east coast.

On April 5, Japan’s Mainichi Shimbun, citing a Japanese government official, reported that during bilateral talks with Tokyo, officials from Pyongyang notified them that they would conduct artillery drills and missile launches by April 17.

Pyongyang has furiously protested Key Resolve and Foal Eagle, the two joint military drills between Seoul and Washington that take place in South Korean waters, despite the allies’ insistence that the annual drills are defensive in nature. The regime has accused the exercises of being “a war rehearsal” against the North.

Kim Eui-do, the spokesman for South Korea’s Ministry of Unification, said at a briefing yesterday that Pyongyang was preparing various events to celebrate its biggest national holiday, although no particular military moves have been detected.

There was no military parade, missile launch or speech by North Korean leader Kim Jong-un at the 2013 anniversary of the birthday of his grandfather, according to the regime’s official Korean Central News Agency.

Yesterday, North Korea once again ratcheted up its condemnation against South Korea for “slandering and insulting” the regime, and denounced Seoul’s announcement that the three unmanned aerial vehicles, or drones, found earlier this month had likely been sent by the North for espionage purposes.

Pyongyang called the South Korean Defense Ministry’s announcement about the drones “a second fabrication following that of the sinking of the Cheonan warship.”

The regime’s Committee for the Peaceful Reunification of Korea said in a statement yesterday that the South Korean government is “crazy about insulting and slandering [North Korea] and the anti-DPRK propaganda.”

So far, North Korea has been ambiguous in its response to the three drones found crashed in South Korea, which contained photos of South Korean military units near the frontline islands, as well as the Blue House.