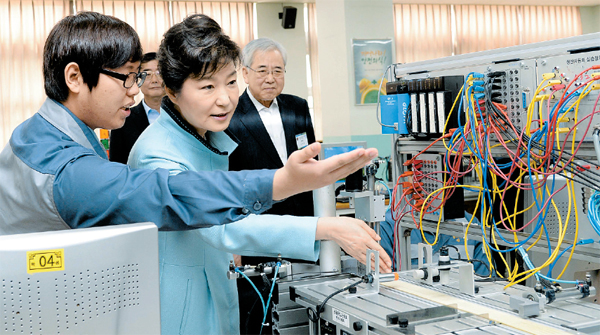 A senior student explains an exercise in an automation course to President Park Geun-hye yesterday at Seongdong Technical High School in central Seoul. Park paid a visit to a vocational high school to show her support for students who opt to attend vocational schools rather than college. [Joint Press Corps]

President Park Geun-hye visited a vocational high school in Seoul yesterday to show her support for students who opt to enter vocational schools rather than attend college.

“I am very much interested in cultivating an educational system and culture to help vocation-oriented high school students demonstrate their talent and capabilities,” she said in the presence of students, parents, graduates, teachers and small-company executives at Seongdong Technical High School in central Seoul.

“This kind of high school should definitely play a big role in enhancing national competitiveness and realizing a creative economy.”

The president has expressed her interest in vocational schools on a number of occasions since taking office and emphasized the idea that vocational training should serve as a backbone for economic growth in a country like Korea that lacks natural resources.

In Korea, an overwhelmingly high proportion of high school graduates attend college - one of the world’s highest at 70.7 percent. 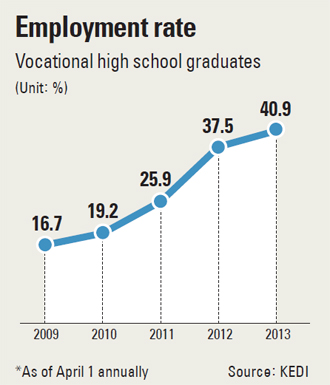 However, youth employment stands at a mere 39.7 percent.

“For Korea to economically leapfrog again, creating a society where [students] can demonstrate their ability after graduation and be recognized for that, instead of their ability gauged by which school they graduated from,” she said.

President Park also stressed the importance of a program that makes it possible for students to land a job first and study later in a field that interests them.

Seongdong Technical High School, formally categorized as a specialized high school, has various departments and a range of courses, from electronics and computers to jewelry design and machinery.

Specialized high schools provide vocational training so that companies that hire students after graduation often won’t need to retrain them - an advantage for corporations and students.

On the back of the government’s support for vocational schools, the employment rate for graduates from those institutions surged from 16.7 percent in 2009 to 40.2 percent last year.

During Park’s visit yesterday, one Seongdong Technical High School student told the president about a group of seniors who had landed jobs at smaller enterprises right after graduation but were quickly disillusioned by the poor working conditions and meager wages.

“I wish the president could help provide support for students to work longer with an upbeat vision,” the student said.

In response, Park promised to establish more dormitories and cultural facilities in industrial complexes for those demographics.

Her comments come after months of preparation. In January, during a visit to Bern, Switzerland, the president toured Gewerblich-Industrielle Berufsschule, a vocational school, and attended engineering and computer-language classes.

Following the trip, Korea and Switzerland signed a memorandum of understanding (MOU) in which 20 Korean students who graduate from Meister high schools and land jobs at Swiss companies operating in Korea will be given a chance to be trained domestically for a year, then for two years at business headquarters in Switzerland.

Established in 2010, Meister high schools - or, literally, “master of trade” high schools - are converted vocational schools that partner with certain companies to tailor their curriculums and courses around the demands of the work force.

They typically refer to institutions that have a vocational training emphasis in the biotechnology, semiconductor, automobile, robotics, telecommunications, energy, shipbuilding and marine industries.

On the sidelines of President Park’s visit to Germany late last month, Korea’s Education Ministry and the Ministry of Employment and Labor together forged an MOU with the German government to collaborate on vocational training.

The agreement will enable more Korean vocational school students to be sent to Germany for training experience.

Germany’s education system has long focused on students choosing their vocations early on.

Except for those attending gymnasiums - a type of college preparatory school - about 50 percent of the remaining students attend vocational schools, taking classes once or twice a day while interning at local businesses.

Most are formally employed after graduation.