Ryoo to have key role on unification committee

Ryoo to have key role on unification committee 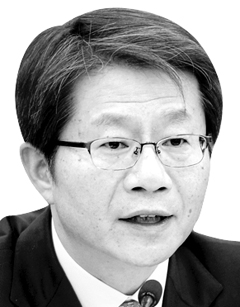 Unification Minister Ryoo Kihl-jae will be named a vice chairman of the committee for unification preparation headed by President Park Geun-hye, which is expected to play a key role in her ambitious plans for the unification of two Koreas.

“Minister Ryoo will be appointed as a vice chairman of the committee and deal with communication and coordination between the government officials and experts from the private sector,” an official who is deeply engaged in the committee told the JoongAng Ilbo on Sunday.

In February, President Park Geun-hye announced during a speech to mark the anniversary of her inauguration that the government would establish a new body to prepare for unification - which she had earlier described as a potential “bonanza.”

Observers are now focused on who from the government will fill the second-most powerful position on the committee, especially with the Blue House and Unification Ministry at odds over candidates, sources said.

Ju Chul-ki, senior secretary to the president for foreign affairs and national security, was initially speculated to be a strong Blue House candidate, though he has allegedly been named the director of the committee’s steering subcommittee.

Sources said that potential nominees for sitting committee members had already been listed.

Selecting another vice chairman among candidates from the private sector is still under way.

“Kang In-duk, a former Unification Minister who has been an adviser for the current administration [regarding North Korean issues], or Ha Young-sun, a former Seoul National University professor and the chairman of the Board of Trustees of the East Asia Institute, have been mentioned as candidates for the second vice chairman,” a Unification Ministry official said. “However, there is the possibility that a third person could be selected.”

Sources said the formulation of the committee has been dragged out because officials across several government ministries are reportedly lobbying to be nominated as committee members.

The expectation is that the committee will rise as an influential organization under the Park Geun-hye administration.