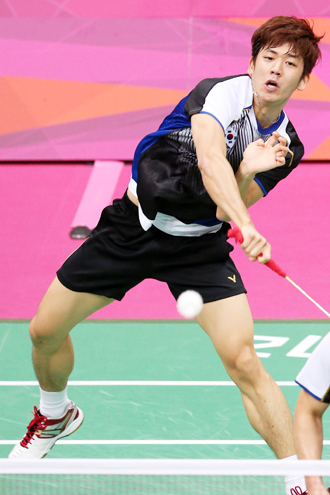 Olympic badminton champion Lee Yong-dae, who was banned from international events for violating Badminton World Federation (BWF) doping protocols, will be able to compete in the 2014 Incheon Asian Games in September.

In a news conference yesterday at the Press Center in Jung District, central Seoul, Shin Geh-ryoon, chairman of the Badminton Korea Association, said the punishment against the 26-year-old was lifted Monday by the BWF.

In January, Lee and Kim Ki-jung, who both play for the Samsung Electro-Mechanics team, were suspended for a year by the BWF because they missed two federation-scheduled doping tests. The federation ruled them ineligible from Jan. 23.

“The panels that manage the doping tests reconsidered the case and decided to lift the punishment,” said Shin. “All records regarding the case will be erased. The two can now compete in any international event.”

The BWF, however, imposed a $41,170 penalty on the Korean badminton organization for administrative failures. Lee and Kim did not take doping tests last March and November when inspectors of the World Anti-Doping Agency visited the Taereung training camp, where the association had said they would be.

Instead, they were competing elsewhere. It was the association’s job to correct and update information about the players’ whereabouts, which it failed to do.

On Feb. 14, the Korean association filed an appeal to the Court of Arbitration for Sports, saying the two players did not refuse to take the tests and never used illegal drugs.

The BWF said on its official website that the BWF Doping Hearing Panel suspended the players, saying that information and evidence presented at the January hearing was insufficient and ambiguous.

“Lee [Yong-dae] told the association he is pleased the punishment has been lifted,” Shin said. “He said he will focus on training for the Incheon Asian Games. Lee will hold a press conference to tell the nation about this issue in about three weeks, when legal work related to the case ends.”

Mok Young-jun of Kim & Chang Law Firm, which worked with the association, said, “The reason the BWF gave the punishment was because the players failed to take the test, but we explained they had not been well informed about the test schedules.”

Lee became an icon of Korean badminton after winning gold in mixed doubles at the 2008 Beijing Olympics. He also won a bronze medal in men’s doubles at the London Olympics in 2012.