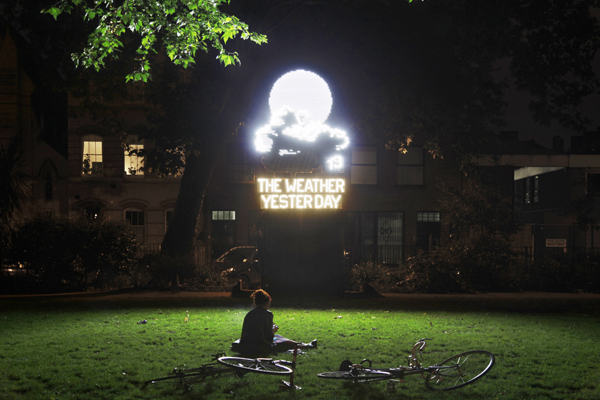 The installations “Falling Light” Provided by the museum

Just to the west of Gyeongbok Palace in the center of Seoul, Daelim Museum’s new exhibition “Troika: Persistent Illusions” celebrates the London-based trio of artists who call themselves Troika - Conny Freyer, Eva Rucki and Sebastien Noel. Using both digital and analogue media, these artists raise questions about the everyday environment around us.

“When I first saw their works at the 2010 edition of World Expo in Shanghai, I knew that I wanted to feature them here in Daelim,” said Kwon Jeong-min, the chief curator, at a press conference at the museum last week.

The three artists say that the start of their journey happened naturally at the Royal College of Art in London.

“In school, we happened to find out that we shared similar perspectives on life,” said Noel.

Freyer added that being able to communicate so well with each other led to strong synergies.

According to the museum, “With a particular interest in perception and the spatial experience, their work explores the intersection of rational thought, observation and the changing nature of human experience through drawings, sculpture and installations.”

When visitors arrive at the museum, they will discover the famous LED installation “Falling Light” shining upon them, with light diffusing into crystal-like circles.

Adjacent to the dark room stands “Electroprobe,” where all kinds of electronics are put together without any sort of order. Viewers will then be introduced to a striking melody - a magnetic microphone revolves around some electronic tools, which range from a television, a radio, a light bulb to a computer. 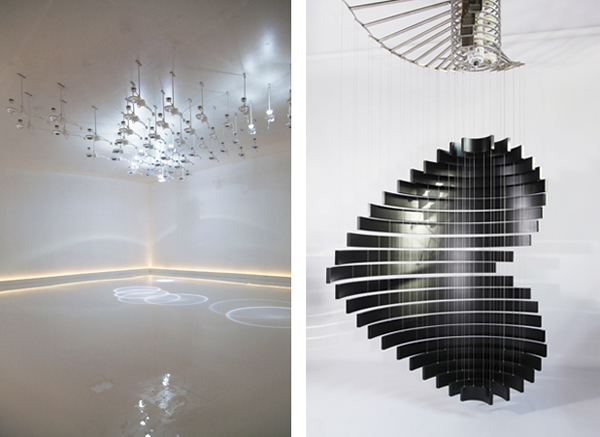 Left to right: “The Weather Yesterday,” right, are part of the exhibition of the London-based artist group Troika at Daelim Museum in central Seoul. “The Sum of All Possibilities,” a kinetic work made of painted wood and aluminium, is also part of the show.Provided by the museum

The point of “Electroprobe” is to convey how the three artists perceive technology. “Objects started to think, and with time, they grew smarter, to the degree of developing rich vocabulary,” noted the artists. The chaotic sound, according to Troika, is how the electronics “talk and argue.” The installation reveals how far electromagnetic radiation extends the footprint of electronic objects beyond their physical and visible boundaries.

The artists then ushered the journalists to their next work, titled “The Weather Yesterday,” an installation that depicts the weather of the previous day. This work, which was originally installed in a park in East London, makes fun of people’s obsession with getting up-to-date information all day, every day. Compared to the outdoor version, the Daelim installation is smaller, but its witty message is still quite amusing.

“The Sum of All Possibilities” evoke the idea of perpetual metamorphoses. While the pattern is simply painted wood, the constantly revolving shapes beguiles viewers.

On the fourth floor, a manic cascade of woven ropes titled “Persistent Illusions” awaits visitors. The three creators noted that the chaotic features of the ropes signify the blurring lines between illusion and reality. 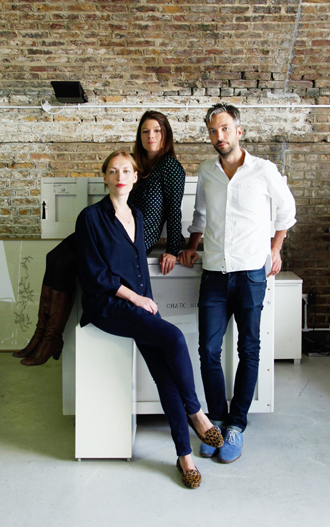 The images of Troika’s “Light Drawings,” which at first glance seem like nerves or plant veins, convey the message that nature holds the potential power to destroy everything.
When the Korea JoongAng Daily asked them whether they had gotten any kind of inspiration since arriving in Seoul, Freyer said “the coexistence of high-tech and low-tech in the city” was the most impressive thing.

Freyer described the intersection of analogue and digital worlds in Korea, and Noel excitedly commented on Seoul’s alley culture. “You would never find anything like the electronic shops by Cheonggyecheon stream elsewhere. Cherish it and preserve it; perhaps you should make all those shops into national treasures,” he said.