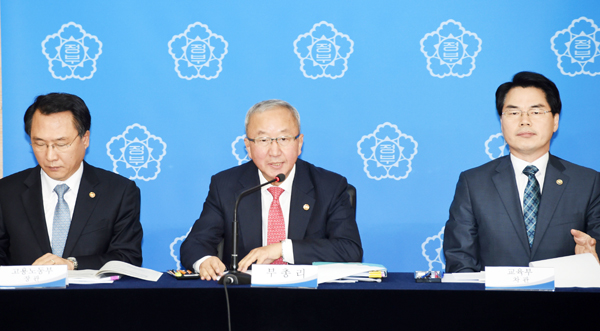 To prioritize job creation for young workers, the government yesterday came up with measures to boost low employment rates of young Koreans by promoting schools that have direct relationships with businesses and by encouraging students to work while they study.

The Ministry of Strategy and Finance and related ministries aim to create 500,000 jobs for youths by 2017 through its dual work-study method, a system similar to that of Germany, Switzerland, Australia and Britain.

To increase youth employment, the government will push schools located near industrial complexes to create classes curtailed to younger workers.

A total of 741 classes are offered in the country at 21 Meister high schools and 137 vocational schools that meet the requirement, but the government wants to see the number of classes surpass 1,000. 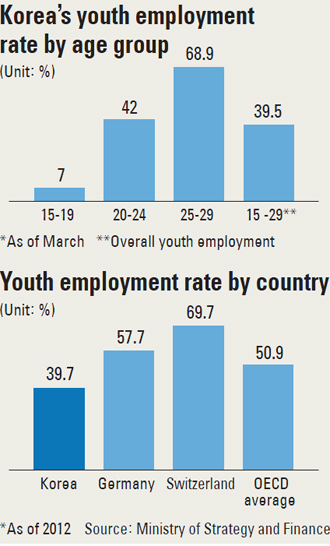 If companies provide financial support for the vocational classes, the government will reduce corporate taxes by 3 to 4 percent for conglomerates, 8 to 15 percent for medium-size businesses and 25 percent for small businesses. It also plans to provide 28.8 billion won ($27.6 million) worth of support directly to the schools that conduct the courses.

The government said it will even revise the National Competency Standards to require companies and schools to prioritize on-the-job training over classroom studies. Currently, vocational or commercial high school students must wait until the second semester of 12th grade before they are allowed to work in their field. But the requirement will be eased to allow 11th-grade students to begin working.

“Youth unemployment faces structural problems that can’t be resolved in the short term,” said Hyun Oh-seok, the finance minister, at a press conference at the Seoul Government Complex in Gwanghwamun, central Seoul, yesterday. “The government hopes that the latest measures serve as a tipping point for the employment problem.”

By 2017, the government also plans to increase the number of businesses that directly support young employees to continue studying from 46 to 10,000, and the number of these employees from 362 to 70,000.

It will introduce a dual work and study system based on Switzerland’s vocational education model, which allows students to study three or four days a week and work for one or two days.

Three high schools will participate in a trial next year to see if studying while working will fit into the Korean educational system.

Currently, graduates of Meister high schools and specialized high schools are eligible to enter the universities while working, but the qualifications will be eased to cover all high school graduates who have been working for more than three years.

According to data from the Finance Ministry, the number of unemployed Koreans aged 15 through 29 reached 410,000 in March, making up 40 percent of the unemployed population.

The Park Geun-hye government’s overall goal is to bring the employment rate to 70 percent by 2017 by creating jobs for unemployed youth and women.

“What the government seeks is a long-term change in the youth labor market,” said Employment Minister Phang Ha-nam. “The main point of the dual system is to let students take jobs first and study later.

“Unlike foreign countries, where about 70 percent of high school graduates find jobs early, the same percentage of Koreans go to university,” the minister said.