Plan aims to get marinas shipshape

Plan aims to get marinas shipshape 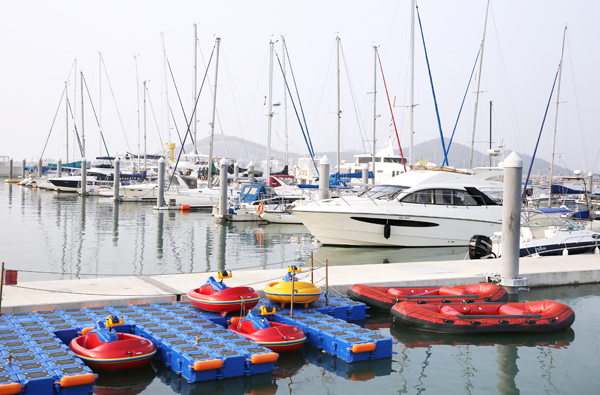 The government yesterday unveiled a plan to trim acquisition and property taxes on yachts as part of efforts to boost the leisure sailing industry around marinas and attract more foreign sailors as tourists.

“The Oceans Ministry will do its best to realize the plan, because the marina industry will satisfy rising domestic demand for leisure facilities and contribute to the growth of the national economy by producing job and value-added profit generators,” said Moon Hae-nam, deputy minister for marine policy.

The Ministry of Oceans and Fisheries requested a cabinet meeting to review lowering taxes on yachts, which are determined by price, to make the vessels more affordable to more local boaters, as well as additional sets of plans to make Korea a hub for leisure sailing in Northeast Asia.

A core part of the plan is to build marinas capable of handling at least 300 boats at six ports by 2017. Each marina would be supported by aid from the central government of as much as 30 billion won ($28.8 million) for infrastructure such as concrete seawalls and CIQ systems (customs, immigration and quarantine). The remainder of the costs would be covered by regional governments and private investors. 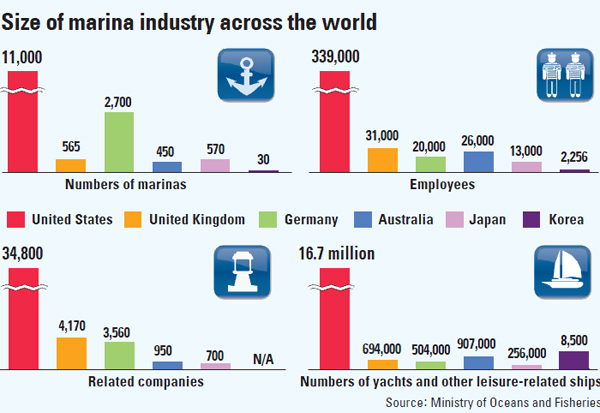 “The new marinas will help bring in more foreign tourists who enter Korea via leisure ships such as yachts because all marinas will be equipped with branches of immigration and customs, as well as related officials,” said an official at the ministry.

Tourists have had to wait until nearby immigration and customs officers arrive at the port. There are only 30 ports for yachts, while only two - in Hwaseong in Gyeonggi and Busan - are big enough to handle 200 boats.

The ports selected for marinas are Deokjeok Island of Incheon and Gogunsan Island of Gunsan, North Jeolla, on the west coast; Yeosu Port of South Jeolla, where the 2012 Yeosu Expo took place and Myeongdong Port of Changwon, South Gyeongsang, on the southern coast; and Hupo Port of Uljin County, North Gyeongsang and Jinha Port of Ulsan, on the east coast.

The designated 100 million won mark is the standard for high-end models, according to the ministry, which wants to start the higher tax rate at boats costing 300 million won. The ministry believes that would lower taxes for many boat owners. The decision will be finalized by the second half of this year, after site inspections by the Ministry of Security and Administration.

The government hopes to upscale the overall sailing industry, including manufacturing, sailing sports events and services related to tourism, generating at least 8,000 new jobs and quadrupling marina capacity to at least 6,000 boats by 2019.