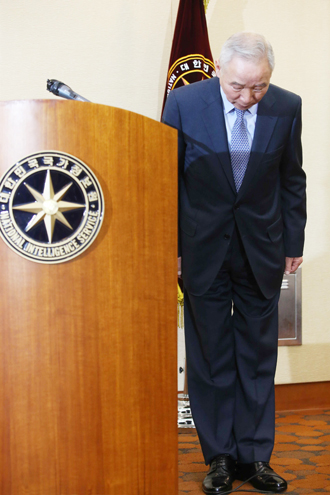 Nam Jae-joon, director of the National Intelligence Service, offers an apology to the public yesterday for the spy evidence fabrication scandal, at the NIS office in Naegok-dong, southern Seoul. [NEWSIS]

National Intelligence Service Chief Nam Jae-joon apologized for the fabrication scandal involving four agents who were accused of falsifying official documents in the name of the Chinese government, but he did not step down despite a demand from the opposition lawmakers.

In a statement he read out at a rare press conference late Monday night in the headquarters of the nation’s top spy agency in Seoul, the 60-year-old Nam said, “I am deeply sorry, bowing my head, for causing concerns to people about the suspicion on the document fabrication regarding the espionage case of the Korean-Chinese, Yu Wu-seong.

“I feel terrible responsibility as the chief of the agency for some NIS agents being indicted for forgery, which should never happen,” he said. “Taking this case as an opportunity, we will carry out a painful reform to root out wrong practices of the past and never repeat them again.”

After reading out his statement for about two minutes, Nam bowed his head in front of reporters and left the press meeting without taking any questions.

Reporters, who were abruptly informed of the press meeting Monday night by a text message from the NIS and were brought to the meeting by an agency-arranged bus, demanded Nam answer questions, particularly on whether he would step down or not.

But Nam left the room hurriedly.

This month, three NIS officials who worked for the Korean consulate in Shenyang, China - including one agent who was working undercover in China - were indicted for falsifying three documents about the immigration record of the Korean-Chinese man Yu, who was suspected of spying for Pyongyang.

Yu is an ethnic Korean-Chinese national who came to South Korea in 2004 under the guise of being a North Korean defector. He ended up working for the Seoul Metropolitan Government and was arrested and indicted in January 2013 for allegedly spying for Pyongyang and providing information on hundreds of defectors living in South Korea from city records.

He was acquitted of those charges in a trial last year after prosecutors failed to submit evidence to prove he visited North Korea for his spying. The prosecution is preparing an appeal of that acquittal.

The Chinese Embassy confirmed in February in a letter sent to Yu’s attorneys that the documents obtained by the NIS agents and submitted by the prosecution to buttress their appeal against Yu were all fabricated.

The NIS chief’s apology came hours after a powerful official in the spy agency tendered his resignation to the Blue House to take responsibility for the scandal.

Suh Cheon-ho, a second deputy director of the NIS who was in charge of domestic and anti-Pyongyang espionage, issued a statement saying, “I feel sorry a shameful thing happened regarding the submission of the evidence in the appeal.”

His resignation was accepted by President Park Geun-hye minutes after it was submitted, the Blue House said.

Park also made an apology for the scandal yesterday.

At a cabinet meeting yesterday, Park said she felt sorry for “causing concerns among the people about the loopholes revealed in the erroneous practices and lax management at the NIS.”

She asked the spy agency to conduct “a thorough overhaul” of itself.

The prosecution indicted two NIS officials on Monday for fabricating evidence, following an earlier indictment of another NIS official.

A fourth NIS official was supposed to be indicted, but he was under medical treatment at a hospital after a failed suicide attempt. His doctor said he appeared to be suffering from memory loss regarding the case.

In announcing a final report on the NIS fraud, the prosecution said it did not indict NIS chief Nam because it could not find evidence that he was involved in the fabrication scandal or was told about it.

The ruling Saenuri Party welcomed the apologies from the president and the NIS head, but the opposition New Politics Alliance for Democracy party criticized the prosecution and demanded a special probe by the National Assembly into the NIS.

“The prosecution announced there was no top NIS official involved in the case,” NPAD head Kim Han-gill said at a party meeting yesterday. “As we expected, they wasted time [on the probe], and they failed to overcome the stonewalling of the NIS.”

“The prosecution only cut the tail of the NIS to protect its chief, Nam Jae-joon,” Jun Byung-hun, NPAD floor leader, said.

“Now the duty of our generation is to have the NIS chief dismissed and a special probe of the agency launched.”