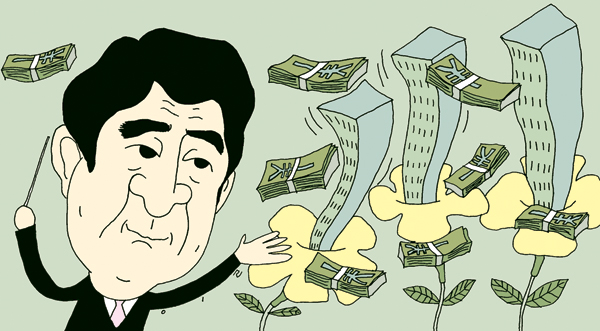 For Abenomics bulls who still hold out hope that Prime Minister Shinzo Abe intends to make good on his pledges to revitalize Japan, the past week must have been at least a little disconcerting.

In that span, Abe unveiled a “new” energy plan, which in fact put to rest any notion that he might use the Fukushima nuclear accident as a spur to invest in renewables. Unveiled on April 11, Abe’s strategy instead promotes an unimaginative mix of nuclear and coal. Then, on Monday, the Japan Exchange Group bizarrely scrapped a move to adopt tougher corporate disclosure rules. Why? The nation’s stock-market operator said that Japanese companies were doing such a splendid job communicating with investors that no such reforms were needed.

Both decisions represent huge lost opportunities for the world’s third-biggest economy. Nearly 16 months into Abe’s tenure, not one single major structural change is in place. What’s worse, policy decisions like these are dragging Japan backward.

Take Abe’s energy priorities. If you handed this plan to a group of engineers, academics and investors and didn’t tell them where it came from, odds are they would guess Indonesia or the Philippines - not a Group of Seven nation. Given its enviable carbon-emissions record, its technical prowess and the public’s fear of reactors since the earthquake-devastated Fukushima power plant began leaking in March 2011, Japan should be much more forward-looking about making the switch to renewables.

This should be the future of Made in Japan - not more cars and electronics that China will soon be designing much more cheaply than Japan can. Even Abe’s mentor, former Prime Minister Junichiro Koizumi, has argued for pouring billions into finding alternatives to nuclear and coal. Such an investment could raise Japan’s competitiveness and living standards, as well as create thousands of innovative new start-ups. Instead, Abe - who remains beholden to Japan’s powerful nuclear lobby - is looking backward, not forward.

The perspective is the same when it comes to corporate governance. When he took power in December 2012, Abe talked big about making Japan Inc. more productive. News media leaks hinted that companies would be forced to name at least one independent director to their boards, that oversight would be strengthened, and the practice of cross-shareholding in order to block takeovers would be curtailed. No such measures came to pass.

Japan, it’s worth noting, ranked 35th out of 38 markets globally for corporate governance in 2010, according to a survey by Governance Metrics International. Of the Topix index’s 1,780 members, just 19, or 1.1 percent, could claim a majority of independent directors at their most recent full-year filing. That compares with 65 percent for the MSCI World Index of developed-market shares. Japan produces the second-lowest return on equity among developed markets and the fewest independent directors.

The idea that Japan Exchange Group sees no need for better disclosure is laughable. In a recent Bloomberg News interview, Taisuke Maruo, a senior manager at the exchange’s cash equities trading venue, said officials were satisfied that companies got “passing marks” on almost all of their important disclosures. Seriously? That’s the measure of success for the corporate culture that produced the Olympus and Daio Paper scandals? One with so many organized-crime connections that even Mizuho Bank got busted financing gangsters? Is that really sufficient for the system that produced and still coddles Tokyo Electric Power, whose negligence led to the Fukushima debacle?

It’s true that Japan’s financial regulator is working up a U.K.-like stewardship code for institutional investors. Lawmakers are crafting legislation to mandate more outside directors and new governance standards. But such steps may be too little, too late. Even Abe’s formal corporate-governance proposals are mostly window dressing. The penalty for firms that do not appoint an outside director? They would have to explain why. I’m sure Japan Inc.’s titans are running scared.

Investors certainly are. The Topix index is down almost 13 percent this year as it dawns on punters that, other than an increase in the sales tax, Japan’s reform drive hasn’t yet amounted to much. The last five days should leave them wondering if it ever will.