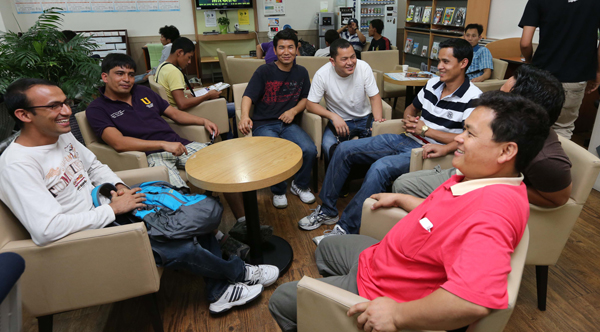 Foreigners talk with one another at Gimhae Foreign Workers Help Center in South Gyeongsang. [JoongAng Ilbo]

Korea is rapidly becoming an aged society. Aging has become a structural trend, with a longer average life span and low birthrate. Aging is a threat to economic vitality because it results in a smaller work force, so the government has been preparing and implementing countermeasures for years. However, the outcome of those efforts is unfortunately insignificant. Korea’s fertility rate is still the lowest among OECD countries.

So allowing more immigrants to come into Korea is emerging as a new option. The foreign work force can be used as an engine for economic growth. However, instead of emphasizing the need to welcome more immigrants, we should have mid- and long-term plans on how to integrate them into Korean society.

The government’s policies for foreign professionals are spread out among various agencies and are not under an integrated management. It generally presumes that having a larger foreign professional work force is good for the country without analyzing the impact on the domestic labor market and economy. When the government announces policies for hiring foreign talent, it always mentions its “gold card” or “science card” that allows the cardholder priority entry through immigration and customs. However, they offer little actual benefit when economy-class passengers go through immigration faster than their luggage at Incheon International Airport, which provides world-class immigration and logistics service.

Instead, the government should establish a system to help domestic organizations select and hire talented foreign employees.

All countries compete to attract foreign professionals and investors. The United States and other developed countries offer generous assistance to help their companies and schools hire foreigners.

In order to attract foreign investors, they provide sites at affordable prices and tax incentives. Even Germany and Japan, which have been relatively passive in taking in immigrants, are not different. At the same time, each government measures the impact on the local labor market and manages their economic systems to minimize the shock.

The policy for the low-skilled foreign work force is at a crossroads. The government has implemented the registered foreign workers system for 10 years in order to address the shortage of workers in small and medium-size companies. In the beginning, the employment period for foreign workers was a maximum of three years, but it was extended to four years and 10 months. In 2012, the “good workers” system allowed the foreigners to renew their contracts, and they can now be legally employed in Korea for nearly 10 years.

However, low-skilled workers employed through the registered foreign workers system cannot be accompanied by their spouses and small children. The Korean government does not issue F-3 visas for family members. Because it could be considered a violation of the international rule of the right of family members to accompany legal immigrant workers as well as the “right to enjoy life with family” guaranteed by the Korean Constitution, modifications to the system are needed.

Moreover, three years from now, some foreign workers will have lived and worked in Korea for 10 years. We should seriously consider allowing them to settle here. While machines become outdated after 10 years of usage, a worker who has practiced the same job for 10 years can become a highly skilled industrial master. The government needs to determine whether to offer them treatment on par with professionals or continue to consider them as part of the low-skilled work force.

We can no longer delay preparing and implementing new immigration policies. There are many ways to do that, but we must choose one. In order to break out of the secluded image of “The Land of the Morning Calm” and take center stage in the international community, opening immigration is essential. As exclusivity is not an option, the choice is obvious, and it is a matter of for whom we remove obstacles along the way. Research on relaxing immigration requirements should be conducted to redesign the system. The first step is to review and revise related laws and an administrative organization to draft and enforce immigration policies.

*The author is a professor of sociology at Chonbuk National University.