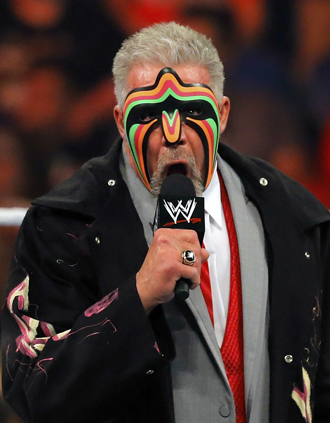 In this April 7 photo, James Hellwig, better known as The Ultimate Warrior, performs for the audience during WWE Monday Night Raw at the Smoothie King Center in New Orleans. The WWE said Hellwig, one of pro wrestling’s biggest stars in the late 1980s, died April 8. He was 54. [AP/NEWSIS]

The Ultimate Warrior, one of the most celebrated names in U.S. professional wrestling, died of natural causes attributed to heart disease, an Arizona coroner’s office said on Tuesday.

An autopsy on the 54-year-old wrestler, whose given name was James Hellwig, confirmed his cause of death was “atherosclerotic/arteriosclerotic cardiovascular disease,” according to the Maricopa County Office of the Medical Examiner.

The condition occurs when blood vessels that carry oxygen and nutrients from the heart to the body become blocked or hardened, restricting blood flow, according to medical experts.

Hellwig collapsed on April 8 outside a hotel in Scottsdale, Arizona, police said.

His death came just days after he was inducted into the World Wrestling Entertainment Inc Hall of Fame.

The 6-foot, 2-inch tall, 127 kilogram (280 pound) wrestler, who changed his legal name to Warrior in 1993, was one of the most recognizable characters in professional wrestling, with neon garb, lengthy blond hair and face paint.