There was once a time in Korea - more than a decade ago - when many people found a scene from “Charlie’s Angels” quite strange. It showed three young women in a 1960s Chevrolet Camaro convertible, speeding into a small alley between a building and a wall that had a “Burgers” sign hung across it. As they turned a corner, they reached a signboard with a menu and prices. After being greeted, they asked for three cheeseburgers and three orders French fries. They turned another corner and were given a yellow bag containing burgers and fries. Then the three women revved the engine and took off with their food in hand, without having to get out of the car.

“Charlie’s Angels” was released in 2000, and this opening scene was very unfamiliar to many Korean viewers at the time. But more than a decade later, drive-thrus are no longer foreign to Korea.

According to industry sources, there are about 200 drive-thru stores nationwide. Out of McDonald’s Korea’s 340 stores, 137 are drive-thrus. Lotteria, a local fast food chain, has 34 drive-thrus at its 1,000 stores and Burger King has 11.

Coffee chains also began offering drive-thru service in 2012. Angel-in-us currently operates nine drive-thru stores, including one in Unam-dong, Gwangju, and one in Bomun-dong in Gyeongju. Starbucks Korea also has eight such stores, and recently, Krispy Kreme joined the game. 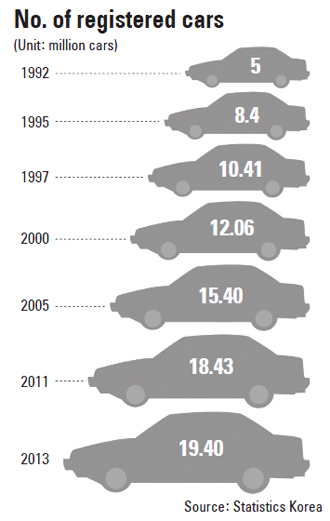 In search of new customers

Drive-thrus were founded in the United States in the 1930s when automobiles became a common means of transportation.

Korea’s first drive-thru store was opened by McDonald’s in 1992 in Haeundae District in the port city of Busan.

“When we first opened the store, there were concerns within us whether or not it would be well received by the market because, compared to other countries, rent fees are relatively high [in Korea] and land area tends to be smaller,” said Woo Hee-jin, director of development for McDonald’s Korea.

But as the popularity of automobiles increased, so did the hope that drive-thru businesses could succeed. In 1992, there were a total five million cars registered in Korea, but by 1997 the number had jumped to 10 million, and in 2005 it surpassed 15 million. As of December, 19.4 million cars were registered, meaning that nearly a third of Koreans own a car.

McDonald’s Korea focused on opening drive-thru stores in areas where people are too busy to park their cars and are looking for a light meal or some coffee in a hurry. Kim Seung-jin, a 37-year-old office worker who drives his car to work in Gwangmyeong, Gyeonggi, everyday from his residence in Sinwol-dong, western Seoul, frequently visits drive-thrus. He stops by a McDonald’s drive-thru near Sinwol Interchange two to three times per week.

“Before, I used to skip breakfast [to save time], but buying something to eat at the drive-thru store is no burden,” Kim said.

Lotteria, which opened its first drive-thru in 1997 in Myeongil-dong, eastern Seoul, said that up to 38 percent of its sales come from drive-thru stores on weekdays.

But drive-thrus are also reaping benefits from the expansion of the five-day work week as families increasingly take the weekend to go on a short trip.

In January, Starbucks Korea opened a drive-thru store near Bomun Lake in Gyeongju, and within its first month around 20,000 customers paid a visit.

“Although customers are mainly travelers in the case of our store, sales are almost double the amount of other stores in the early phase of opening,” said Lee Soo-jung, manager of the branch.

The coffee chain predicted that rather than sitting down at a coffee shops for a chit-chat, tourists would prefer takeouts so that they can quickly head to their next destination.

“Our drive-thru store in Gyeongju is an example of how we created new consumers in a commercial area where there is hardly any floating population,” said Lee Seok-koo, CEO of Starbucks Korea. “We plan to open more diverse types of drive-thru stores by continuously searching for life zones involving automobiles.”

Grafting with IT, tradition

Providing quick and convenient service is a must for drive-thru stores. In general, it takes three minutes for a customer to receive a bag of food or drinks after placing an order. McDonald’s Korea and Starbucks have adopted a system in which consumers get what they ordered in less than a minute and 30 seconds.

Quick service at drive-thrus is possible in Korea as food and coffee chains have merged IT with their ordering systems.

For example, at all drive-thru stores operated by Starbucks, there is a 42-inch smart panel where consumers can communicate face to face with baristas in the store. The Seattle-based coffee chain developed the face-to-face ordering system with the help of a local IT company, and the screen is only found at stores in Korea.

When a car approaches a drive-thru store, a sensor notifies the employees that a customer has arrived. Customers can search through menus on the screen and can also view their order and receipt.

Angel-in-us has customized its drive-thrus by decorating the outside of the stores to look like a traditional Korean house.

The coffee chain’s Gyeongju store, which opened in July 2012, has a traditional tile roof to create harmony between the building and other tourist destinations nearby.

Meanwhile, pioneering drive-thru stores are diversifying by making partnerships in other industries. Lotteria’s Pangyo branch, which is located at the entrance of the Gyeongbu Expressway, offers a one-stop service where consumers can order food at the drive-thru while getting a gas refill.

The McDonald’s Seocho District drive-thru store near Seocho Interchange is also located next to a gas station. The fast food chain said that it has around 30 drive-thru stores cooperating with SK Energy and GS Caltex.

Out of Burger King’s 11 drive-thrus, eight are located next to gas stations. According to the company, average daily sales at stores joined with gas stations are more than 20 percent higher than at its independent drive-thrus.