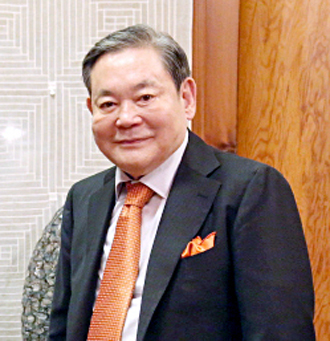 Samsung Electronics Chairman Lee Kun-hee is expected to return to Korea as early as this week, according to Samsung Group yesterday.

The impending return of the traveling 72-year-old chairman is drawing more attention than usual as the group is undergoing a series of changes in its affiliates, which analysts consider a blueprint for the group’s future.

Lee was known to have been drawing up management strategies in Japan and the United States.

“Although it is not yet confirmed, many within the group assume that Chairman Lee will return to Korea as early as this week,” said a spokesman for Samsung Group.

While Lee was out of Korea, mergers between Samsung SDI and Cheil Industries, and Samsung General Chemicals and Samsung Petrochemical, took place. Samsung Securities and Samsung Life Insurance underwent restructuring.

Samsung pruned the management of its financial units following a decline in their profitability due to low interest rates.

A tense atmosphere is reported among CEOs of Samsung affiliates as they prepare to report to the chairman.

They will report on the mergers, the global response to the recently launched Galaxy S5 smartphone, sales of curved UHD TVs and the status of premium home appliance Chef Collection’s refrigerator in the market.

Lee was informed of relevant details while he was staying in Japan and gave approvals from there. He will also see whether the so-called “Mach management” that he ordered during a New Year’s address earlier this year is being instituted.

Mach management calls for a fundamental change in the company using the metaphor of a jet, for which everything is changed from its architecture to its engine, to be able to break through the Mach speed, or the speed of sound, of 340 meters (1,115 feet) per second.

The chairman emphasized the need for innovation in the group’s business structure and technology to prepare for uncertainties in the future in his New Year’s address. Lee has been emphasizing development of new products through convergence, along with development of new technologies and synergies among affiliates.

Samsung will also have to address public criticism against the group for only hiring graduates from prestigious universities, a gas leak at a Samsung facility in Suwon, Gyeonggi, that left one worker dead and the anti-Samsung film “Another Promise” that depicts Samsung Electronics’ semiconductor plant workers suffering from leukemia.

“Whether the reporting will take place at Samsung’s headquarters in Seocho-dong, southern Seoul, or at Lee’s home in Hannam-dong, central Seoul, has not been decided yet,” the Samsung spokesman said.

However, it is likely that Lee will stay at his home in Hannam-dong most of the time rather than going to work at the headquarters in Seocho-dong.

Lee is reportedly in good health. He underwent treatment for lung cancer in the late 1990s and was hospitalized last year for a few weeks with pneumonia. The chairman spent the end of the year in Seoul and attended a New Year’s ceremony and the annual Samsung Proud People Awards for 2013 on Jan. 10. He left the country the following day.