Picking up a Samsung man

Picking up a Samsung man 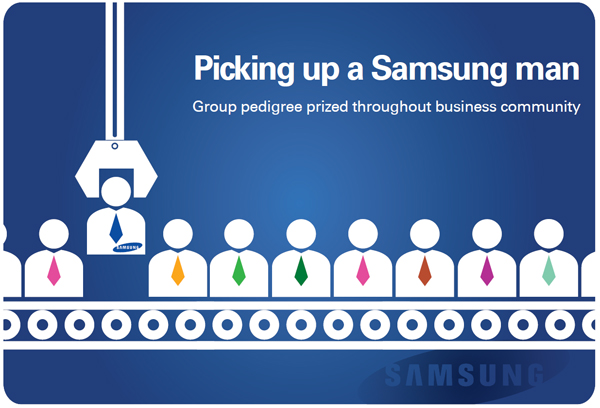 When a snake shows up out of nowhere, a Hyundai Group employee catches it with bare hands. A Doosan Group employee asks colleagues what to do through an intra-group social network service. And a Samsung Group employee? He opens a book of guidelines from the Samsung Restructuring Headquarters to a chapter on “How to Deal With the Unexpected.”

The joke swirled around the business community a decade ago, but it strikes a note of truth today when the Samsung Restructuring Headquarters no longer exists. Few deny that such a meticulously directed central management system, now engineered and executed by several decision-making departments, played a significant role in the group’s rapid rise to international prominence.

And - not surprisingly - the “Samsung way” for years has been the model for Korean companies that aspire to global success.

In recent months, the Samsung following is emerging in the form of hiring former or incumbent Samsung Group executives to implant so-called Samsung DNA into their business culture.

A trend leader is KT. Since Hwang Chang-gyu, a former Samsung Electronics president who led the company’s leap to become the world’s No. 1 memory chip maker in the early 2000s, took office as the head of the formerly public corporate giant in January, KT has brought in four former Samsung executives and put them in senior positions. Kim In-hoe, who served as a senior executive of Samsung Electronics Japan, was Hwang’s first Samsung alumnus pick. He was hired as KT’s chief treasurer in February.

Following him to KT was Suh Joon-hee, a former vice president of Samsung Securities. Suh, the new CEO of BC Card, a KT affiliate, was serving as head of a charity organization run by Samsung Group when KT hired him.

Choi Il-sung, a former vice president of Samsung C&T, was picked up as head of KT Estate last month, while Choi Sung-sik, a former Samsung Life senior vice president, was brought in to head a newly created ethics management center of KT this month.

Many other manufacturing or service companies unrelated to Samsung are following suit. Hyundai Pharm, a pharmaceutical company, appointed Kim Young-hak, former Samsung Electronics digital media group head, as its CEO. Even SK Hynix, which is competing with Samsung Electronics in the global semiconductor market, is hiring Samsung men.

It follows a move by Lim Hyung-kyu, a Samsung Electronics executive, to become vice chairman of SK Hynix, and by Oh Se-yong, another former Samsung Electronics executive, to president of the manufacturing management unit. Samsung is the world’s largest memory chip maker and SK Hynix is No. 2. In the overall semiconductor market, Samsung is second and SK Hynix fourth.

“It’s not because of their Samsung background that the company brought them in,” said an official of SK Hynix. “But it is true that they have proved their management talents at Samsung and some other companies, and we want to make use of it.”

NH Nonghyup Card brought in Shin Eung-hwan, a former Samsung Card executive vice president, as its president last month. Nonghyup had been known for its conservative stance in employing outsiders. Many outsiders see it as a bid to tap Samsung know-how to deal with a crisis situation. Nonghyup is one of three credit card issuers hit by massive customer data leaks this year.

The public sector is also recruiting Samsung executives. The Korea Racing Authority, the country’s sole operator of horseracing, appointed Hyun Myung-kwan, former Samsung C&T chairman, as its CEO in December, its first from the private sector.

“Samsung is good at finding areas of inefficiency and maximizing productivity, and that is an ability that many companies are looking for,” said an industry watcher who declined to be identified. “Public companies under pressure from the government to streamline their inefficient management system will likely hire more Samsung men in the future.”

Park Ki-chan, a researcher at the Institute of Global Management think tank, said it is natural for many Korean companies to hire Samsung executives. 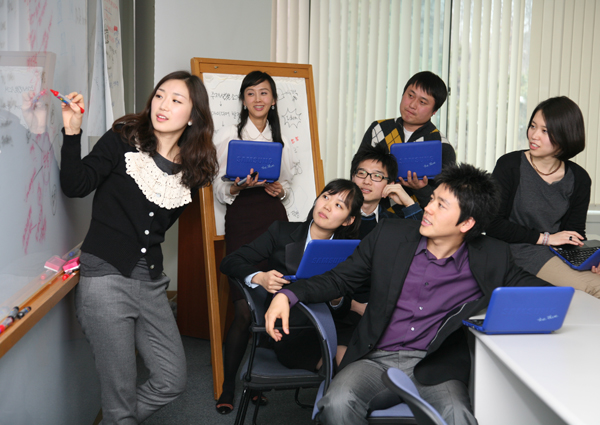 New employees of Samsung Group, fresh out of college, learn the “Samsung way” through systematic training programs drafted by the Samsung Human Resources Development Center in Yongin, Gyeonggi. Samsung employees are No. 1 targets for scouters of many local companies. Provided by the group

“The global success that Samsung is enjoying now was something unthinkable only a decade ago for a Korean company and many companies think, ‘Well, maybe we can do it, too, in a Samsung way,’?” Park said. “Samsung’s personnel management system, in particular, has cultivated the Samsung way and that’s why the companies are trying to infuse Samsung blood onto their veins.”

Samsung, which started as a small trade company in Daegu in 1938, has long adopted “people first” as the first of its “five core values.” Lee Kun-hee, a son of Samsung founder Lee Byung-chull and the current Samsung leader, has stressed human resources since taking over the leadership of the group in 1987. In starting the famous “New Management” initiative in 1993, Lee Kun-hee said one talented person can feed 10,000 people.

The heart of the ideology to realize the people-first principle is Samsung’s secretive Human Resources Development (HRD) Center in Yongin, Gyeonggi.

“Visiting the HRD Center is part of our special tour program for VIPs,” said a Samsung Group official. “When foreign visitors are asked which places they want to visit most, many of them point to the HRD Center.”

The HRD Center runs a training program for all new employees. “The most important goal of the entry level training is a value-share program, which has implemented the philosophy of people-first management,” said an official of the group.

Other training programs conceived of by the HRD Center include the global regional expert system, under which a Samsung employee is paid to become an expert on a country. More than 5,000 people have been dispatched to more than 90 countries since the program was introduced in 1990.

The Samsung MBA program was introduced in 1995 that provides full tuition and salary to engineers pursuing degrees. In addition, there are weeks-long programs for those newly promoted to any higher position.

“Some personnel training programs at local companies would be just for killing time. There are not many things provided to help hone their business skills,” said a Samsung Group official. “Our program, I think, really helps change people for the better.”

Some question, however, whether they can credit the abilities of Samsung men to Samsung training programs. After all, the group has its pick of top college graduates. More than 90,000 students took the Samsung Aptitude Test at sites across the country last Sunday. They were competing for about 4,000 positions.

“People assume Samsung employees already have proven talent,” said an official of Samsung Electronics. “So no matter where we are, we would be able to excel. Is it true? I actually don’t know.”

Being trained to be a Samsung man is one thing. Leading another company in the Samsung way is another. Some companies have long favored hiring former Samsung employees without producing any notable outcomes.

Dongbu Group is a prime example. The group has hired many former Samsung executives and now two of its 10 key affiliates are run by former Samsung men. Such a recruitment practice earned the nickname “After Samsung.” But the group, which grew to be the country’s 10th-largest conglomerate in the early 2000s, is now struggling to overcome a fiscal crunch.

“There has been a power struggle between those imported from Samsung and those who have been at Dongbu for a long time,” said Park at IGM. “It is not enough just to change people.”

Many experts agree that Samsung DNA is a product of the system. “No matter how smart an individual may be, it is not easy to implant it into another company on his own,” a Samsung Electronics official said.

Similar doubts exist about KT. The move by Hwang and other Samsung employees won’t change the country’s 11th-largest entity’s deeply rooted public corporation culture anytime soon. Indeed, an early expectations boosted by Hwang’s arrival turned to doubt after KT was embroiled in several scandals in recent months, including the hacking of the company’s website and an alleged loan swindle scandal by a KT affiliate.

“The mood is somewhat not as rosy as it was,” said an official of KT.

Despite much progress, Samsung still has room to improve, even in its personnel management system, according to Rhee Moo-weon, a business administration professor at Yonsei University. He said much of Samsung’s business performance is not so much due to personnel management as the synergy of its extensive business areas and that Samsung still lacks corporate color compared with other global companies such as Apple and Toyota.

“Toyota worked hard for its quality management and it is still consistent. Apple is known for its innovation and employment incentives,” he said. “But Samsung still has an image that it is relying on the hard work of its employees through a top-down, decision-making process.”

Rhee said local companies can refer to Samsung’s experience, but they also have to be open to finding their own way.

“Sometimes, companies hire Samsung personnel to make public their will to change,” said Park at IGM. “But if they only end up pleasing the stockholders, that’s useless.

“They should try to learn a Samsung system, rather than hire a Samsung man.”