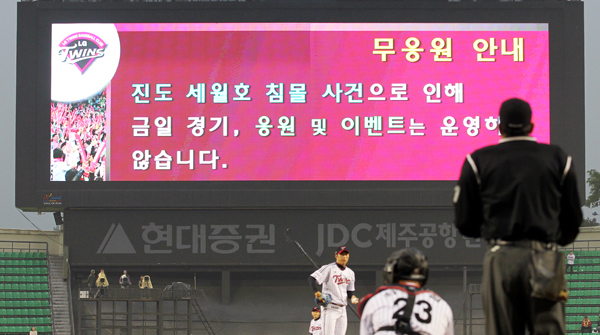 “Any types of ceremonies and celebrations including cheerleading performances will not be staged in tonight’s game due to the Sewol Ferry disaster” is displayed on the scoreboard as Twins pitcher Lim Ji-seob warms up before last night’s game against Nexen Heroes at Jamsil Stadium, southeastern Seoul. By Kim Min-kyu

Korea’s professional baseball and football games were subdued in response to the ferry disaster that left nine dead and 287 missing as of press time.

Starting Wednesday, Korea Baseball Organization teams canceled their first-pitch ceremonies, which frequently involve celebrities, and there were no cheerleaders or songs at the games in Seoul, Daegu, Gwangju and Busan.

“We decided not to do such things to express our regret over the ferry disaster,” said a spokesman for the LG Twins before yesterday’s game against the Nexen Heroes at Jamsil Baseball Stadium. “We are not sure when we will resume cheerleading activities, but I think there will be no celebrations or cheerleading at the ballpark for a while.”

The Korea Professional Football Federation also announced that there will be no cheerleading, fireworks or songs during the Round 9 match tomorrow between the Jeonbuk Hyundai Motors and the Chunnam Dragons. In addition, the match will start with a moment of silence for the ferry victims.

“We hope everyone involved in the disaster will come back home safely,” said a spokesman for the Jeonbuk Hyundai Motors.

The match between Goyang Hi FC and Ansan Police FC scheduled for Sunday was postponed because about 200 students from Danwon High School in Ansan, southern Gyeonggi, remained missing in the accident.

Meanwhile, messages of condolence arrived from football clubs in Europe.

Liverpool FC of the English Premier League posted a tweet and a message on its Facebook page that read, “The thoughts of everyone at Liverpool FC are with all those affected in South Korea after the ferry disaster in the Yellow Sea.”

Tuesday was the 25th anniversary of the Hillsborough Disaster, which occurred during an FA Cup semifinal match between Liverpool and Nottingham Forest FC at Hillsborough Stadium in Sheffield, England. A stampede and crush of people left 96 people dead and 766 injured.

Manchester City of England and FC Mainz 05 of Germany’s Bundesliga, where Koo Ja-cheol and Park Joo-ho play, also expressed their condolences via Twitter and their Korean Facebook pages.