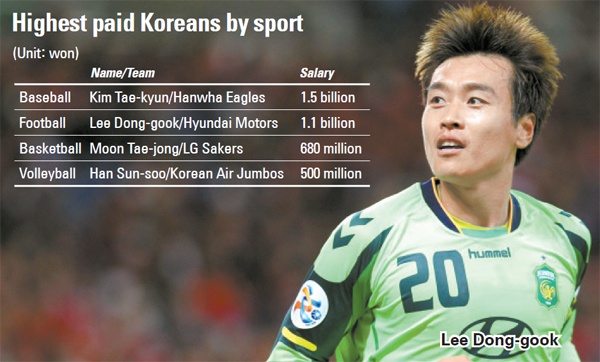 Striker Lee Dong-gook of the Jeonbuk Hyundai Motors is the highest paid Korean player in the K-League Classic.

This season, a total of 75.4 billion won ($72.6 million) was spent on player compensation by the 11 classic league teams. The average salary this year is 163 million won per player, an increase of 6 million won from last season.

Teams paid 17.7 billion won in total to the 36 foreign players this season, an average of 494 million won each.

Among Korean players, Lee of Hyundai Motors was the most expensive, receiving 1.14 billion won this season. Striker Kim Shin-wook of the Hyundai Tigers was the second highest paid at 1.07 billion won, and midfielder Kim Doo-hyun of the Samsung Bluewings was third at 832 million won.

The highest paid player in the league was FC Seoul forward Mauricio Molina of Colombia at 1.32 billion won. Brazilian midfielder Leonardo Pereira of Hyundai Motors was next at 1.18 billion won, then Server Djeparov of Seongnam FC at 1.16 billion won.

Last year, the football federation publicized an estimated average salary for 641 Korean players for the first time since the league was established 30 years ago. It also reported club revenues from ticket sales.

The federation said the cost of player compensation is too high compared to teams’ income and that publicizing such information would facilitate fair competition among teams and encourage clubs to deal with financial issues more transparently.

However, clubs worry that publicizing compensation and revenue information could have a negative impact on their ability to plan their annual budgets. Football insiders said many K-League clubs, even major teams like the Suwon Samsung Bluewings and Jeonbuk Hyundai Motors, cut players’ pay last year after the football federation announced the estimated average salary. Some people also worry that top earners will become targets of fans’ criticism whenever a team struggles.

The football federation also said yesterday that it will release each club’s financial statements and develop a “Financial Fair Play” system, a guideline that will help clubs develop healthier financial systems.