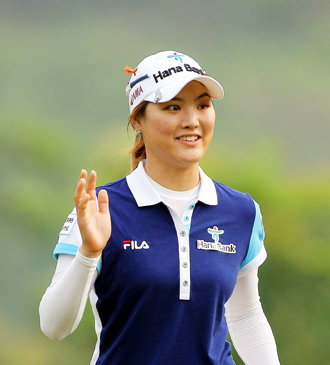 Ryu So-yeon shot a 4-under 68 Wednesday to take the lead halfway through a windy first round of the LPGA Lotte Championship.

Japan’s Ayako Uehara was one stroke back.

Ryu, the 2012 LPGA Rookie of the Year, had five birdies and one bogey. She birdied three of the first five holes, teeing off from the front nine into the wind.

Ryu said she was able to clear her mind with a week off after a bad result at the Kraft Nabisco Championship, where she tied for 46th.

“I really don’t think about score or my performance. I just focus on the present and don’t worry about any difficult holes,’’ Ryu said.

Top-ranked Park In-bee shot a 2-under 70. Park had four birdies and two bogeys.

“I got off to a really good start today. Obviously, the wind wasn’t blowing as hard for my first five holes,’’ Park said. “The greens seem a little bit more slippery and I had trouble on the back nine controlling the distance. You have to have perfect contact to ride the wind.’’

Lee So-young had a share of third with Park. Lee said she wasn’t intimidated by the conditions at Ko Olina Golf Club, located in a resort area on Oahu’s west side.

“The wind here is less that where I play [at home], so that was not a factor,’’ she said.

Wie returns to her hometown after a runner-up finish at the first major championship of the season, the Kraft Nabisco, at Mission Hills.