From deflation to stagflation?

From deflation to stagflation? 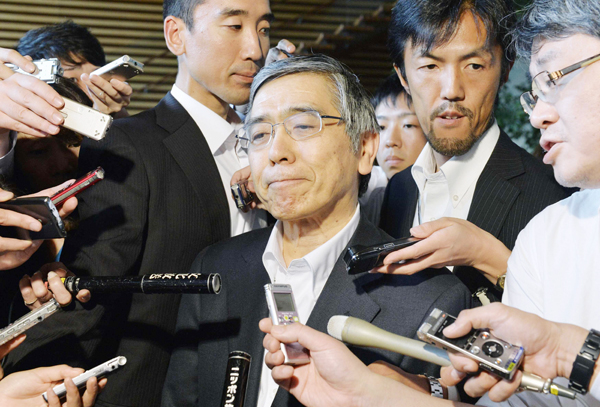 April has been a disorienting month for Tokyoites as prices for from everything from coffee to T-shirts to DVDs seem to be jumping inexplicably.

We residents of the world’s most expensive city expected a slight bump after the government’s April 1 move to hike the sales tax by 3 percentage points. What we may be getting instead is a touch of the price gouging that marred the introduction of the euro 15 years ago. This is no cash-register conspiracy theory: Japanese media reports indicate that giant companies from Suntory Beverage and Food to beef bowl chain Yoshinoya Holdings are indeed using the new tax levy as an excuse to raise base prices on the sly.

After nearly 20 years of deflation, one understands the impetus. The pent-up demand on the part of executives to boost prices is dovetailing with excitement over the Bank of Japan’s efforts to boost inflation to 2 percent. But is Japan getting too much inflation too quickly? Worse, isn’t this really the bad kind of price rise, based more on corporate opportunism than economic fundamentals? Yes, and sticker-shock could ruin the BOJ’s plans to convince Japanese that inflation is a good thing.

The headline-effect won’t help. The April inflation rate could turn out to be 3.5 percent, the fastest since 1982, economist Yoshiki Shinke of Dai-ichi Life Research Institute tells Bloomberg News (he’s been the most accurate Japan forecaster for two years running now). The trouble is, consumer prices are racing far ahead of the salary increases Prime Minister Shinzo Abe is counting on to restore sustainable growth. Now, his revival plans face a triple-whammy: too much inflation, too little wage growth and higher taxes.

When Abe met with Governor Haruhiko Kuroda for lunch on Tuesday, you can bet prodding the central bank to print even more yen was high on the menu. But more quantitative easing would just exacerbate Japan’s too-much-inflation-too-soon problem. The weaker the yen gets, the pricier energy imports become. This too is bad inflation, the kind that will eventually roil the bond market of the nation with the world’s biggest debt burden.

Kuroda’s confidence game has worked so far. He’s managed to keep 10-year-bond yields well under 1 percent and, recent losses in equities aside, to convince many overseas investors that Japan Inc. is back. Yet the magic that surrounded the BOJ’s move last year to double bond purchases is wearing thin as Abe drags his feet on the structural reforms needed to end deflation.

For an economy ensnared in a liquidity trap, monetary policy isn’t enough. Only genuine confidence will spur companies to hike wages and to unleash the virtuous cycle Abe desires. Instead, Japan may be experiencing some of the same pitfalls that befell Europe when its single-currency arrived in 1999.

Then, from Lisbon to Vienna, consumers were enraged by dramatic price surges. Italians and Spaniards joined in nationwide shopping strikes, Germans overwhelmed price-gouging hotlines set up by the government, French newspapers were loaded with tirades about how statisticians were monkeying around with official inflation data. By November 2001, then-French Finance Minister Laurent Fabius was quoted in the New York Times railing against “scandalous” euro-camouflaged markups. Most public officials, though, denied that the art of rounding up had become the norm and a cottage industry emerged to debunk the idea. Almost daily, then-European Central Bank Governor Wim Duisenberg insisted that the euro-cash changeover hadn’t significantly affected prices.

As Europe’s experience shows, households vote with their pocketbooks. If the perception among Japanese is that prices are suddenly surging, Abe and Kuroda have a huge problem on their hands. After so many years of deflation, says BOJ board member Sayuri Shirai, most people see price gains as “unfavorable.” Any increases perceived as excessive could lead Japan down the road toward stagflation.

What to do? Abe must deliver on his pledges to encourage entrepreneurship, alter an antiquated corporate tax code, lower trade barriers, loosen labor markets and empower his underutilized female work force. Abe and Kuroda also must resist the urge to treat consumers like idiots.

If European officials had taken steps to offset rising costs instead of pretending it was some mass delusion, the region might not be the stagnant mess it is today. Japan needs to do better, and soon.