Today’s restaurants an embarrassment of riches

Today’s restaurants an embarrassment of riches 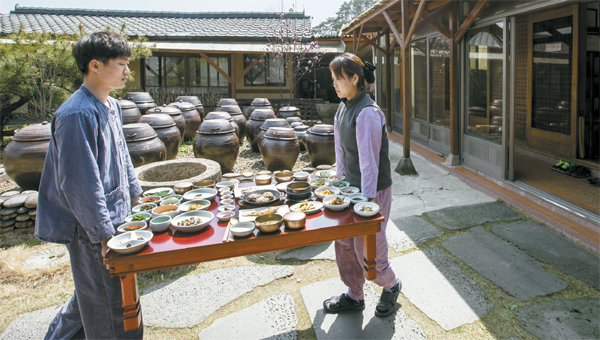 One of the two tables full of Korean food for five people at a Jeolla restaurant.By Cho Yong-cheol

Over and over again, it was just too much food.

A special reporting team at the JoongAng Sunday, an affiliate of the Korea JoongAng Daily, headed out across Korea, dividing into three teams to check out 60 restaurants all over the peninsula, save Jeju Island.

Our goal: to check how much food was being served at Korean restaurants.

Among the 60 we visited, 42 were simple baekban restaurants, while 18 were fancier hanjeongsik restaurants.

After having meals at these restaurants, we concluded that Korean restaurants squander far too much food. The problem is more pronounced in restaurants outside of Seoul, which tend to serve more side dishes, or banchan, especially in the Jeolla provinces.

We began by wondering when Korean restaurants supplied so many dishes - marinated and boiled vegetables, dipping sauces, seared fish fillets, seasoned meat, tofu and so much more.

In the Joseon Dynasty (1392-1910), a dining table was named after the number of banchan on it. A basic meal was comprised of a bowl of rice, a soup, some kimchi, dipping sauces and banchan. If there were three banchan, it was called samcheop (sam being the Korean word for three). For five banchan, typical for more successful people, it was called ocheop, while aristocrats might receive seven or nine banchan.

What Koreans eat at home, the dining table is closer to samcheop.

“Nutritionally speaking, samcheop includes all five major nutritional categories, including carbohydrates, protein and fat, and is more than enough,” said Chung Hae-kyung, a food and nutrition professor at Hoseo University. “Anymore than that would be considered excessive.”

However, for our survey, we typically found between six and nine banchan at the baekban restaurants, which are supposed to serve simpler meals.

A table with more than 30 dishes, left, is all just for three people at a Korean food restaurant in Jeonju, North Jeolla. That is more than a king would typically receive in Joseon times, as seen in the photo on the right.[JoongAng Ilbo]

At the hanjeongsik restaurants, the meals were even more bigger. At one location in Seoul, we paid 50,000 won, or $48, for a meal with 26 side dishes. At another place in Jinju, South Gyeongsang, we received 30 dishes, and 34 at one in Gwangju.

Despite the plethora of banchan, these meals often were not very balanced nutritionally. They tended to have a lot of seasoned vegetables but little protein, and many seemed to use similar ingredients with different recipes.

Because there was just too much food that tasted similar, we had to leave a lot behind on the table when we were done. With larger meals, we were sometimes too full partway through to taste anything that came later.

Some researchers say that this tradition of excess stems from Korea’s concubine culture. Food critic Hwang Kyo-ik said that cooks who used to work at royal palaces moved into concubine houses after the Joseon Dynasty collapsed, where they continued to fill tables with all sorts of food.

“Those places stayed popular until after Korea’s liberation [from colonial rule in 1945] and, by the time concubine houses died out, only the presentation of the dining table was left,” said Hwang. “That’s the source of what we now call hanjeongsik. I heard that story directly from the owners of hanjeongsik restaurants in Insa-dong and Jeolla province.”

Although there is no definitive proof for this theory, many local researchers agree that it could be one source of the tradition.

“That argument could be true,” said Chung. “Or such a tradition could have been handed down because more recipes were made toward the end of the Joseon era.”

Another theory suggests the excess is rooted in ego, as people like to show off their wealth.

“Before, people made a lot of food for a good cause so that they could share their wealth with the underprivileged, but that tradition has been handed down wrongly,” said Han Bok-ryo, president of the Institute of Korean Royal Cuisine.

“As society has gone through radical changes, people somehow inherited the idea that a traditional Korean meal includes [a large number of dishes], and people who later become wealthy started to put out more dishes on their dining table to show off their success.”

In the Joseon era, the king may have received plenty of food and dishes - typically more than 12 dishes - however, the leftovers then all went to his subordinates, so nothing went to waste.

In present times, people often receive more food than the king ever did, and are also forced to leave food behind. But now those leftovers just go to waste.

Well, they usually go to waste. According to research by the Korean Society of Food Science and Nutrition, about half of all hanjeongsik restaurants and many baekban and buffet restaurants just reuse old banchan if it has not been touched.

Such places like to claim it is acceptable because they only do so if the original customer never touched the dish. Around 50 percent of Korean restaurants also said that they would reuse vegetables after washing them.