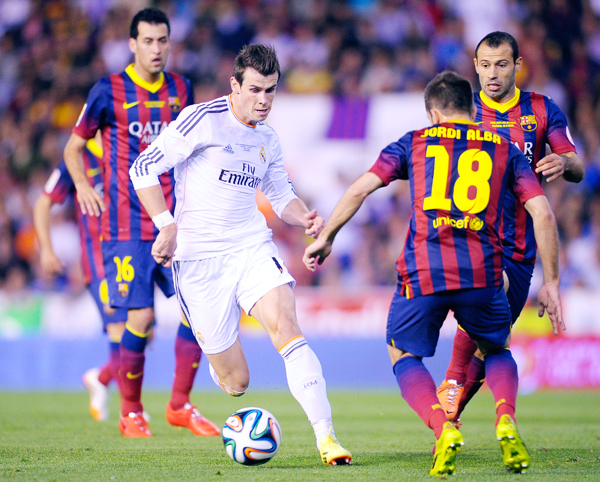 Real Madrid’s Gareth Bale, center, drives the ball past FC Barcelona’s Jordi Alba during the final of the Copa del Rey at the Mestalla stadium in Valencia, Spain, Wednesday. [AP/NEWSIS]

Angel di Maria scored Madrid’s opener from a counterattack in the 11th minute, capitalizing on a Barcelona lineup that seemed to lack ideas in attack and was slow to recover in defense.

Defender Marc Bartra equalized against the run of play in the 67th by heading in from a corner kick to ruin goalkeeper Iker Casillas’s record run of not conceding in this edition of the tournament.

The goal appeared to energize Barcelona, sparking Lionel Messi into action and making the last 15 minutes a frenetic back-and-forth contest.

But with the game hanging in the balance, Bale got the winner when he sprinted down the left side of the pitch, even running out of bounds to avoid Bartra, before racing into the area and rolling the ball under goalkeeper Jose Pinto.

“It is difficult to see a player be able to sprint like that at that stage of the game,’’ Barcelona coach Gerardo Martino said. “The game was going our way after we had leveled, until that counterattack.’’

Madrid manager Carlo Ancelotti said the goal was “surely the most important’’ of Bale’s career, which took a major turn last summer when Madrid broke its own spending record to pay his 100-million euro transfer to pry him from Tottenham.

“It was a decisive moment. When Bartra scored anything could have happened,’’ Ancelotti said.

Barcelona, however, still had one last chance, only for Neymar’s shot to hit the upright in the 90th.

Neymar’s last-gasp effort almost “scared us to death,’’ Casillas said. “Fortune was on our side, and we are thankful for it.’’

Ronaldo joined his teammates to celebrate with their fans on the pitch before the team filed past King Juan Carlos to receive their medals and the prized trophy.

The plane carrying the Spanish monarch had technical problems that delayed take-off, but he arrived on time to watch the match along with more than 50,000 spectators divided into large sections of white and blue-and-burgundy club colors.

After failing to win the cup competition between 1993 and 2011, Madrid has won it twice in the past four years.