Feast your eyes on history in 3-D

Feast your eyes on history in 3-D 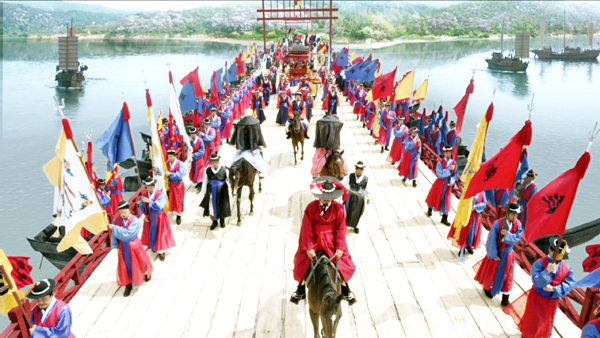 The highlight of the 3-D documentary “8 Days: Two Faces of the Feast,” is the crossing of the Han River, which King Jeongjo’s procession managed in a manner fit for a king. Provided by KBS

Documentaries are not exactly the hottest pick at the box office, especially if the same subject was just covered on TV a year earlier.

But for KBS producer and director Choi Pil-gon, it made sense to turn a three-part historical series based on eight volumes of Uigwe books - records of royal protocols from the 1392-1910 Joseon Dynasty - into a 3-D feature.

At a press conference on Monday for “8 Days: Two Faces of the Feast,” Choi said that with the aid of 3-D technology, his team tried to bring “the most accurate and real representation” of the events to the big screen.

Last year, two years after the nearly 300 Uigwe books were repatriated to Korea from France, Choi produced a TV show based on the eight-volume “Wonhaeng Eulmyo Jeongni Uigwe,” which recounts an eight-day trip made by King Jeongjo in 1795 to Hwaseong to visit the tomb of his father.

As it was the 60th birthday of the king’s mother, Lady Hyegyeong, she came along, too.

TV audiences were captivated by the elaborate trip, involving a royal court procession that travelled from Changdeok Palace in today’s Seoul to what is now Suwon, and back.

“You know with some historical events you have to conceptualize and improvise, but with something like this, when every detail is laid out for you in pictures and words, you have to stay true to the facts,” said Choi, admitting that playing it by the book was one of the biggest challenges.

After all, this was no ordinary observance: Some 6,000 members of the court joined in on the journey.

With every day recorded, King Jeongjo also ordered for 102 copies of the manuscript to be distributed for commemoration.

In the course of the celebrations, there were visits to his father’s shrine, nighttime military drills and meetings with the public, but no doubt the highlight of the trip was the theatrical crossing of the Han River, which took place from where present-day Yongsan is to Noryangjin.

A 330-meter (1,082-foot) floating bridge constructed for the procession, made by linking 36 boats, was “something you can’t see happening in modern Seoul,” said Professor Kim Moon-sik of Dankook University’s department of history.

“Those ships were bigger than the boats you see on the Han River these days,” said Kim, noting that some ships in the Joseon era measured 70 meters in length.

Apart from the logistics of the major journey, the film brings into focus the trauma suffered by young Jeongjo, the 22nd king of Joseon, starting with his childhood when he witnessed his father’s death at the hands of his grandfather.

The film also highlights Jeongjo’s life, riddled with persecution and treason from opposing factions. The emotional side of the documentary’s subjects were mostly ignored in the TV version, giving way to sturdy facts and interviews with historians.

This time around there are moments of weeping and unexpected revelations of warmth, such as when Jeongjo serves his mother himself and later when he promises to make life easier for his subjects.

“Jeongjo is one of those kings who has been shown on TV and in the cinema, but I never knew he had held such a big festival and I felt what a great king he was,” said the 16-year-old narrator Yeo Jin-goo, who said he had to spend some time doing some research to get into the project.

“But the fact that he allowed commoners to take part, too, I think was meaningful.”

“8 Days: Two Faces of the Feast,” which was released yesterday, is one of two films to put the spotlight on King Jeongjo this month.

Hyun Bin will also give his rendition of the king in the action film “The Fatal Encounter,” to open April 30.