Messages tell of love and fear from within the wreck

Messages tell of love and fear from within the wreck

SNS messages between a teacher and students and text messages a student sent to his mother before the ferry completely capsized.

A handful of the passengers on the ferry that capsized off the southwestern coast of Korea yesterday managed to send messages to family members in the frantic hour or two after the accident occurred at 8:40 a.m. Wednesday.

They are now circulating online and on social networking services, giving an intimate glimpse into the terror and heartbreak of the accident.

Not knowing what was occurring inside the heavily listing ship, Jang Mi-ja, the mother, replied at 9:36 p.m. that she also loved her son and signed off with three heart symbols.

Fortunately, 11th-grader Shin was among the 76 students rescued from the sinking.

“I could not have been happier when I heard my son’s voice on the phone, but I tried not to show my emotions because I was with other parents anxiously waiting to hear from their loved ones,” said Jang. 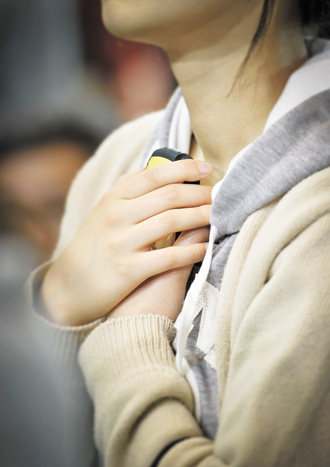 A student, right, watches a TV broadcast yesterday at the auditorium of the Danwon High School in Ansan, Gyeonggi, hoping for the best for her trapped schoolmates. By Lim Young-soo, [NEWS1]

As water started pouring into the distressed vessel, students took out their smartphones and conveyed what could be their final messages to family members, with some even trying to calm panicking parents.

“I am wearing a life jacket and huddled with my friends. I am still inside the ship.”

The father replied, “I know the rescue operation is under way, but there is danger of the ship sinking. Why don’t you come out to the deck? Try to come out if you can.”

Shin remains one of the 245 missing students from Danwon High School in Ansan, Gyeonggi.

Fellow student Kim Woong-ki sent his older brother a number of messages on Kakao Talk’s messaging service, giving him accounts of what was occurring in real time.

“Brother, we were on our way to Jeju Island, but the ship hit something and stopped. We were told rescuers are coming to us now.”

The brother hurriedly replied, “Is the ship sinking?”

“The rescue team will be there shortly,” his brother relied. “Don’t panic and stay calm. Move as fast as the rescuers tell you to.”

A series of messages was exchanged in a group chat on Kakao among 38 students and the teacher in charge of them as the ship filled with water.

An unidentified student replied, “No one seems hurt yet.”

Three minutes later, another student asked the teacher, “Are you ok?”

This was followed by another student asking, “Are you wearing a life jacket, teacher?”

The teacher urged all of her charges to don life jackets and stay calm.

As the tragedy entered its second day yesterday, the public wondered whether some of the messages would be the last recorded words of the ferry victims.

Bin, an 11th grader, sent his mother a text message with a photo of the sea around 8:40 a.m., minutes before the ship began listing.

Mother replied, “[The photo] looks good. Are you okay? Son, please answer me.”

She received no more messages from her son.

Kim Dan-bi, left a voice mail for her mother after she couldn’t reach her on the phone.