Passengers abandoned by captain, most of crew

Passengers abandoned by captain, most of crew 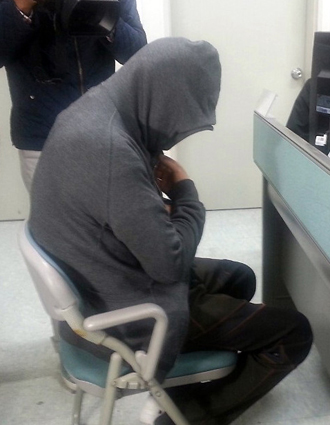 The 60-year-old captain of the Sewol, which capsized Wednesday, is questioned at the Mokpo Coast Guard in Mokpo, South Jeolla. [NEWS1]

Twenty of the 29 crew members of the Sewol, including the captain, abandoned the sinking ferry with hundreds of passengers trapped inside - without even telling them to flee for their lives.

The 60-year-old captain, Lee Jun-seok, was among the first 50 people rescued by Coast Guard lifeboats, according to police. One witness said he didn’t even get wet in the tragic accident.

“I feel so sorry,” Lee told reporters after questioning by police yesterday. When asked if he had anything to say to the families of the 286 missing passengers, Lee said, “I have nothing to say.”

Lee was rescued at around 9:50 a.m., about 50 minutes after the first distress call was sent at 8:57 a.m., according to the Coast Guard, and some survivors who were on the same lifeboat as him. The ship completely capsized at around 11:20 a.m.

“I was rescued in one of the first groups, but there were already about seven people in the patrol ship of the Coast Guard,” a survivor told the JoongAng Ilbo on the condition of anonymity. “The captain was one of them, I knew that because I asked the Coast Guard. His clothes were not wet at all.”

According to police, the primary reason why most of the missing passengers are students from Danwon High School in Ansan, Gyeonggi, is because they were in cabins on the deck situated two floors beneath the top deck. The deck above them, and even the one below, had more direct routes to the top deck. Passengers on those decks managed to escape.

Many of the survivors said the crew told them to stay in their cabins for more than an hour after they heard a crash and felt a jolt at around 8:40 a.m. There was never an announcement to evacuate the sinking vessel, they said.

“The ship was listing on its side, and seawater started to fill the cabin,” a student who survived told the JoongAng Ilbo. “But the announcements [by the crew] told us to stay in our places, even after 10 a.m.”

According to survivors, the crew repeated the announcement six or seven times.

“I felt a shock and heard a helicopter approaching, but there was no one on our deck to guide us,” another student told the JoongAng Ilbo. “There was no adult around.”

The crew gave no safety instructions before the accident, said Jang Hyeon-jeong, a female student whose nose was broken as she fled the ship.

“No one told us to wear a life jacket in case of an accident when we boarded the ferry the day before,” Jang told the JoongAng Ilbo. “There was an English-language sign near the jackets saying they were for dangerous situations. When we put them on, many jackets had flaws such as broken zippers.”

The captain and six crew members left the ship at around 9:50 a.m. Thirteen other crew members left separately. After they were gone, there was no one to lead evacuations, the Coast Guard said. Kim Seong-wuk, a 47-year-old parent of a missing student, blamed the crew for the tragedy.

“The disaster is the result of most crew members abandoning the ferry to save themselves, ignoring their duty to rescue passengers,” Kim said.

The Coast Guard’s Jeju branch said it ordered the crew to prepare for evacuation at around 9 a.m., right after the captain sent the distress call at 8:58 a.m. But they did not take any evacuation measures, the Coast Guard said.

In fact, the first person to report the accident to officials was not the captain or a member of the ferry’s crew but the father of a passenger, according to the Coast Guard, who was alerted to the news by his son by mobile phone.

One minute before the captain’s distress call, at 8:57 a.m., Lee Han-il, a student, called his father and told him about the accident, the father said. The father immediately called all the emergency numbers he could think of.

Under the Seafarers Act, the heaviest punishment the captain could receive for abandoning his ship and its passengers is a five-year jail term, prosecutors said.